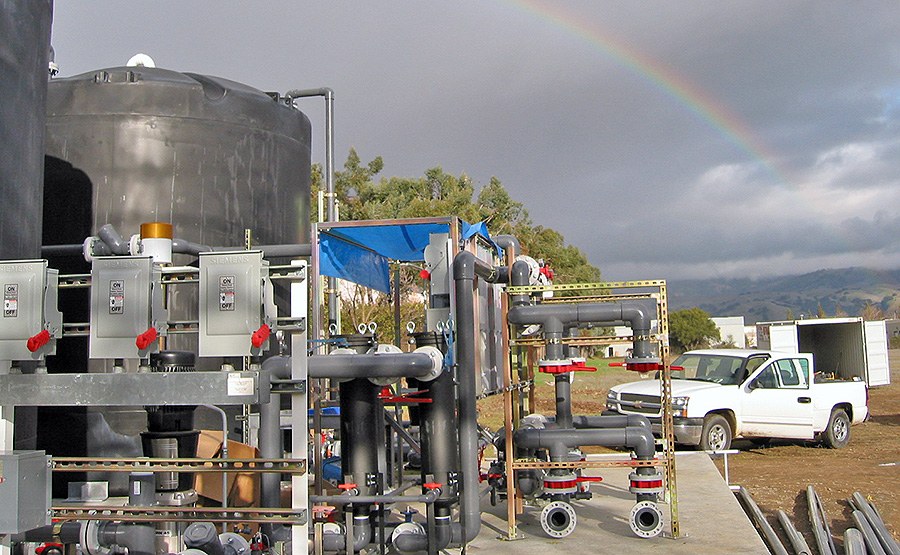 Olin Corporation (Olin) began signal flare manufacturing operations in 1955 at an 11-acre property located in Morgan Hill, California. Signal flare manufacturing continued at the site until 1996. In 2000, perchlorate was detected in the site soil and groundwater during a due diligence investigation stemming from Olin's efforts to sell the property. The Central Coast Regional Water Quality Control Board (Board) issued a series of Orders that prompted Olin to conduct additional soil and groundwater characterization. In March 2003, the Board instructed Olin to submit an evaluation of potential remedial alternatives for on-site groundwater and soil. Pending the outcome of a data gap analysis and the establishment of a soil remediation goal, the preliminary Alternatives Evaluation (prepared by an incumbent consultant) anticipated that the remedial scope would include extraction and treatment of groundwater at 30 gallons per minute (gpm), and treatment of 10,000 cubic yards of soil. In September 2003, the Board issued an Order requiring Olin to initiate groundwater remediation by the end of the year and soil remediation in the first quarter of 2004.

Olin requested that Geosyntec review existing site data and identify data gaps, if present; develop and negotiate a site-specific soil remediation goal that is protective of groundwater; assist the incumbent consultant with remedy development; and serve as Olin's technical and regulatory advocate in its interactions with the Board. Additional field data showed that the extent of perchlorate in the soil was greater than initially believed, increasing the remedial soil volume to approximately 80,000 cubic yards. The additional field data also resulted in an increase to 250 gpm in the estimated pumping rate to achieve hydraulic containment of site groundwater. Given the significantly larger scope of work and the aggressive regulatory schedule for remediation issued by the Board, Olin requested that Geosyntec assume responsibility for remedy development and implementation.

Geosyntec's efforts on the groundwater remediation system were recognized by Olin's Project Manager, "Despite the aggressive schedule demands by Olin Corporation and the Board, Geosyntec successfully designed and implemented a complex on-site groundwater containment and perchlorate removal system with few unforeseen difficulties and within the estimated budget. It was a pleasure working with a consulting company willing to partner with other companies in successfully meeting our corporate goals." Olin reported on August 1, 2006, that the soil remediation program at the site was complete more than one year ahead of schedule and meeting the regulatory requirements set forth by the Board in its Order. Soil remediation at the site was achieved at a cost savings of over $2 million compared to the presumptive remedy. The project was recognized by the American Council of Engineering Companies (ACEC) as an Engineering Excellence State Award recipient.