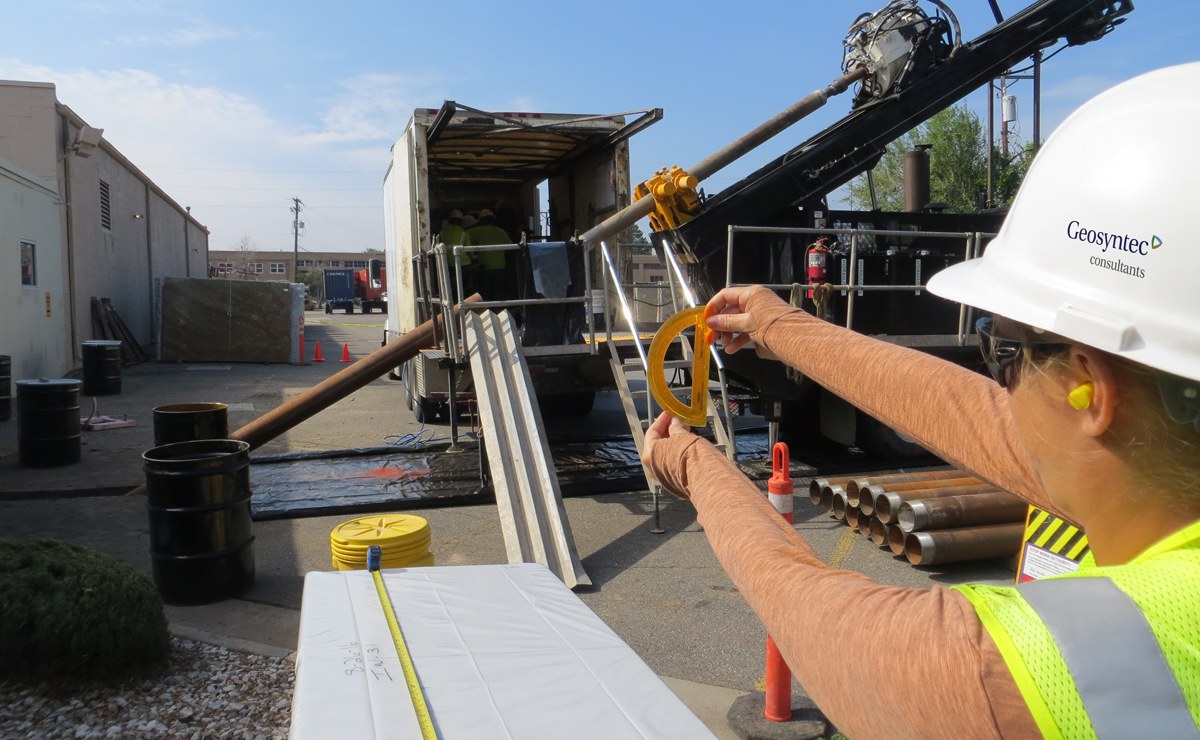 A residual DNAPL source area (total VOC concentrations as high as 25,000 to 30,000 g/L) is located in weathered bedrock up to 40 feet below a large industrial warehouse that houses an active business.

Initially, Geosyntec designed and implemented an interim hydraulic containment system to prevent contaminants from leaving the site by extracting groundwater, removing chlorinated solvents via an air stripper, and re-injection of treated water. The system was subsequently modified to destroy 1,4-dioxane using an advanced oxidation process (AOP). To further characterize the residual source area under the building, several slanted wells were completed under the building and hydraulically fractured to facilitate the use of ISCO to reduce contaminant mass. Angled boreholes were advanced and continuously cored at 60 degrees from vertical toward the location of the former source area under the active facility. Additionally, Geosyntec has initiated the phased implementation of a passive EISB treatment barrier using emulsified vegetable oil (EVO) and bioaugmentation and shut-down a portion of the active hydraulic containment system.

For the down-gradient plume, Geosyntec has implemented EISB remedies in three discrete areas using EVO and bioaugmentation. The down-gradient plume also caused concerns of vapor intrusion into indoor air for nearby residential areas. We implemented a comprehensive indoor air-sampling program, with several hundred homes receiving vapor mitigation systems to date. We have also implemented comprehensive compliance and remedy performance monitoring programs to track reduction of contaminant levels throughout the plume.

The hydraulic containment system has successfully cut off flux of VOC contaminants from the source area to the down gradient plume. Proper operation of the treatment system has eliminated surface water discharges for the last several years, resulting in considerable savings related to testing, evaluation, and treatment costs.

The bioremediation injections have been successfully conducted in densely populated residential neighborhoods since Geosyntec coordinated injected activities with local residents and obtained required permits with local municipalities. The combination of hydraulic containment and bioremediation injections has resulted in VOC concentration reductions of up to 99%. MNA monitoring has shown VOC concentrations have declined in more than 90% of offsite wells. The indoor air sampling and vapor mitigation program was among the first to be implemented in the state of Colorado and set precedent for how the Colorado Department of Public Health and Environment approaches vapor intrusion sites.