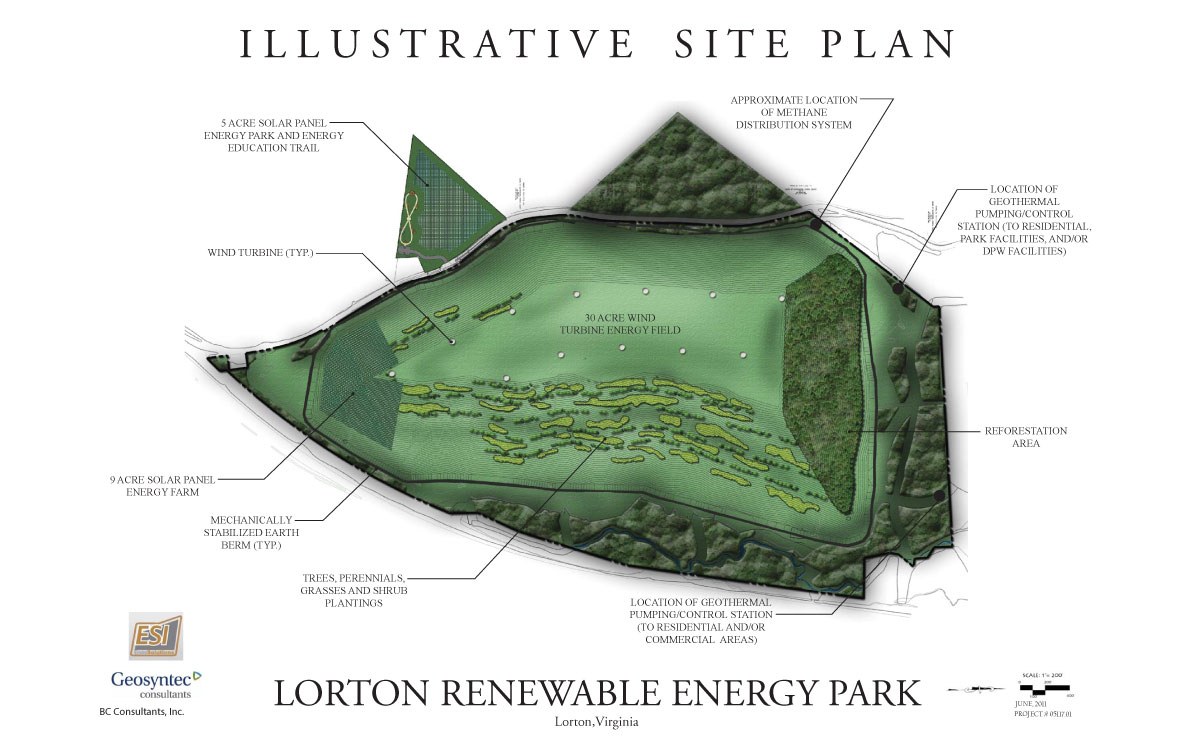 ESI’s long-term vision is for the landfill property to transition over the remainder of its operational and post-closure life from a landfill disposal facility to a state-of-the-art renewable energy park. To extend the operational life of the Lorton Landfill, ESI plans to increase the disposal capacity by constructing a mechanically stabilized earth (MSE) berm around the perimeter of the landfill footprint. They retained Geosyntec to conduct a detailed feasibility study on the phased implementation of various renewable energy technologies (RETs) in conjunction with the planned expansion. The purpose of the feasibility study was to evaluate the technical and financial feasibility, aesthetic qualities, and regulatory and public acceptability of four RETs: solar, wind, biogas methane, and geothermal (GT) technologies. The feasibility study provides the basis for financial planning for developing the renewable energy park, particularly with regard to the optimal timing for deployment of RETs.

Geosyntec investigated supply and demand side opportunities and constraints on phased utilization of landfill property parcels within and outside the limits of waste, as well as projected capital expenditure, recurring costs, and revenues. A key focus of the study was to identify optimal timing for cost-effective deployment of RETs. The energy potential at the landfill will be available in two major forms – electrical energy from solar and wind sources, and heat or thermal energy from biogas methane and the GT source – both of which will become available to differing degrees at different phases of the landfill’s lifecycle. The maximum amount of renewable energy supplied by RETs at the landfill will occur towards the end of landfill operations and during the post-closure stage of the landfill, when the facility has reached its maximum size. Primary findings from the study were that a small-scale solar project outside the landfill limits and medium-BTU biogas utilization offer immediate benefits and could take advantage of current tax credits for renewable energy.Ov er the medium term, opportunities to exploit the biogas potential and geothermal heat capacity of the landfill exist. After closure capping, installation of a large-scale solar and wind application appears attractive. Overall, if developed as planned, the Lorton Energy Park will feature four RETs with total energy output in excess of 10 megawatts (MW), comprising a minimum of 2MW of solar, 4MW of biogas, 1MW of geothermal, and 3MW of wind power.

Geosyntec showed that ESI’s plans to increase the size and capacity of the landfill will have a beneficial impact on all selected RETs at one or more stages of their deployment and usage. This will be a positive factor during the permit review process for the proposed landfill expansion. In addition, by providing more certainty that the landfill will remain in economic operation for a period in excess of that required for RET projects to be financially viable, ESI can make longer-term decisions on capital investments for RETs. Once developed, the renewable energy produced would help reduce the carbon footprint of the local community by reducing or offsetting the use of fossil fuels for their daily energy needs. ESI’s deployment of RETs will also support the long-term efforts of Fairfax County in meeting its environmental goals. Lorton Energy Park is notable in that it would represent the first landfill to utilize the heat capacity of waste for GT energy supply to offsite end users, and would also be the first landfill at which four individual RETs are developed concurrently.