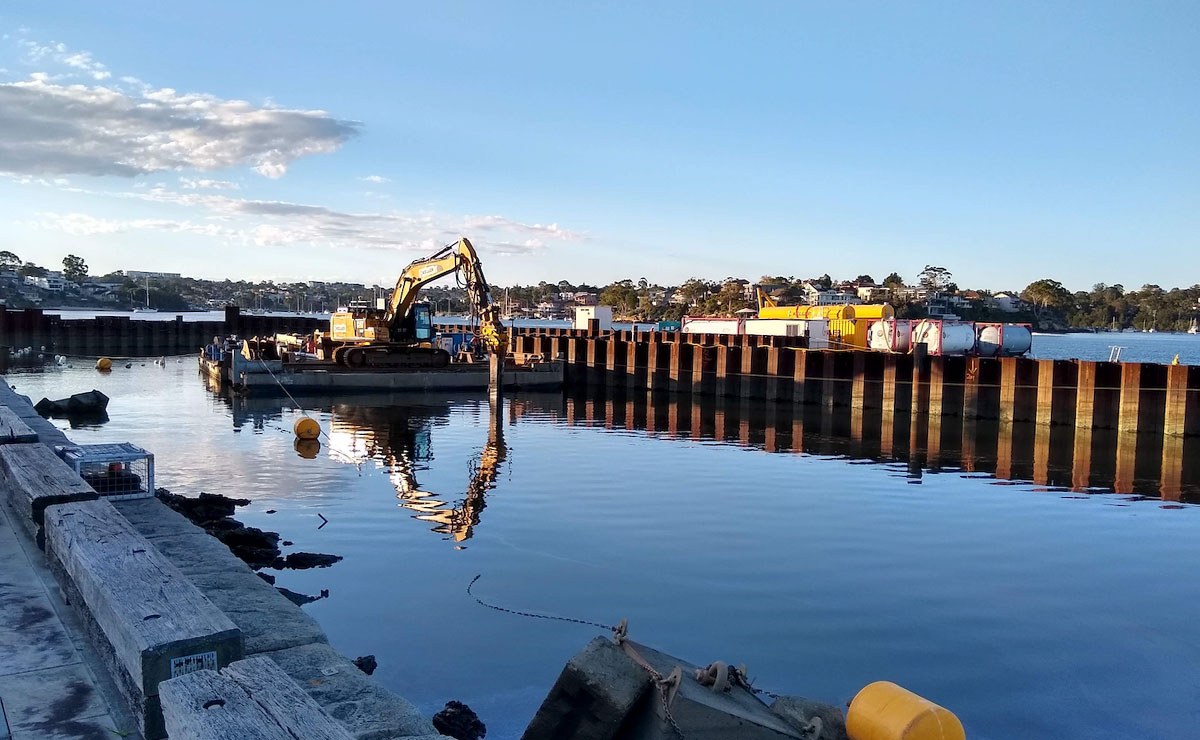 Once home to the largest manufactured gas plant (MGP) in the southern hemisphere, Kendall Bay in Sydney, Australia is now surrounded by a residential neighborhood. The ultimate goal of the project is the effective cleanup of the impacted sediments at the bottom of the Bay.

As part of a remediation contractor's design team, Geosyntec was retained for a design-build project to conduct the remedial design, provide on-site construction quality control (CQC) services, and assist with the overall technical direction for the cleanup efforts. Remedial components specified in the Remediation Action Plan (RAP) include dredging, capping, in situ stabilization (ISS), and seawall replacement. Because the use of ISS on subaqueous sediments had never been done before in Australia, comprehensive treatability and two-phase field pilot study would be required to demonstrate that the remedy set forth in the RAP could be successfully implemented and remedy components could be seamlessly integrated.

Geosyntec began by designing and evaluating a multi-step laboratory treatability study to identify the optimum mix design, grout modifiers, and enhancers required to achieve the performance criteria set forth in the RAP. Upon completion of the treatability studies, we recommended mix design(s) for ISS to be performed in different parts of the Bay. Geosyntec supported the design and implementation of a two-phase field pilot study to commence the mixing equipment, batch plant and construction approach, and to demonstrate effectiveness in the field.

Geosyntec then developed a validation plan and a framework to specify the field screening and laboratory geotechnical and chemical data necessary to verify the effectiveness of the ISS field implementation. We also oversaw the implementation of the ISS field pilot study to help collect CQC samples and address problems encountered during construction.

Following the successful completion of the ISS field pilot study, Geosyntec continued supporting Ventia on the design of the full-scale remediation. The design elements include refining the ISS mix design, ISS footprint and thickness, removal of surficial debris and sediment along the seawall, and multi-layered cap to protect human health and ecological receptors.

Geosyntec oversaw the commencement of the ISS works, provided on-site construction support and troubleshooting, and CQC services. Full-scale remediation was completed and Geosyntec shortly after the completion of ISS and capping works received regulatory acceptance.

Geosyntec co-authored the Remediation Completion Report that was approved by the regulatory agency, demonstrating that ISS can be successfully implemented in subaqueous sediments in Kendall Bay, breaking new ground in the use of advanced technologies in Australia. Also, the technical arguments that we provided allowed optimizations to the project’s environmental controls and significantly reduced and/or eliminated having to use a reactive amendment content of the cap layer, resulting in significant cost savings to our client.

This project is the first to field implementation of full-scale in-situ stabilization/solidification of sediment using subaqueous mass mixing techniques for environmental purposes. The project was completed two months ahead of schedule and under budget. Kendall Bay project received multiple awards to date, including an Innovation in Sustainability award as part of the Edison Awards in April 2021, and Project of the Year in NSW and Sustainable Remediation Project in NSW from Australian Institute of Project Management in November 2021.