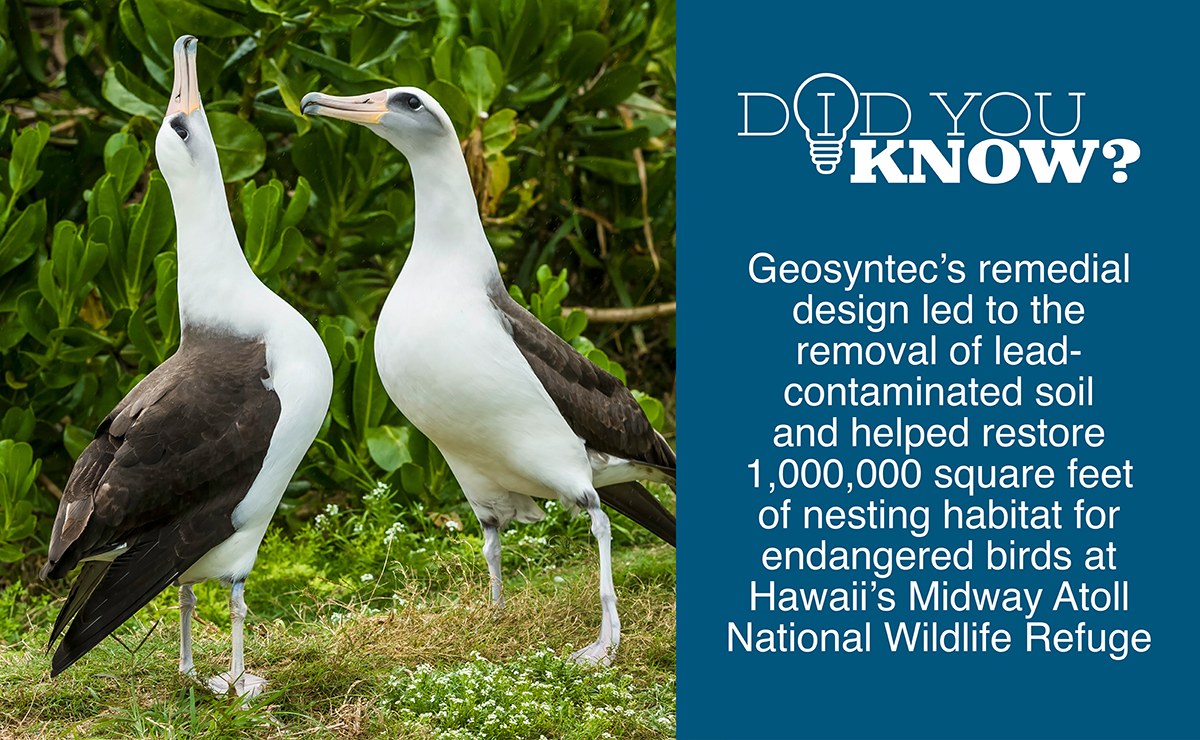 Midway Atoll is a 2.4-square-mile atoll in the North Pacific Ocean, roughly equidistant between North America and Asia. Until 1993, it was the home of U.S. Naval Air Facility Midway Island and was designated as the Midway Atoll National Wildlife Refuge in 1988.

Due to decades of deterioration of island infrastructure, lead-based paint has accumulated in soils at concentrations that have led to high mortality in nesting avian wildlife, including the endangered Laysan Duck and two species of albatross. Ingestion of the lead results in a condition known as droop wing, making them unable to lift their developing wings off the ground. As many as 10,000 chicks had previously died from starvation and dehydration each year from the toxic effects of lead. Geosyntec was retained as part of a team led by NW Demolition and Dismantling to develop and implement a six-year, multi-million-dollar, non-time critical removal action (NTCRA) relating to the removal of the paint from structures and the treatment and removal of lead-contaminated soil to protect the nesting birds from lead contamination for future generations.

A critical aspect of our work at Midway was to protect existing habitat and to work around active refuge operations, relegating the on-island field season to July through October to avoid nesting birds. We began by collecting over 1,000 soil samples using hand sampling techniques. This led to our implementing the in-situ treatment, excavation, and proper disposal of about 32,000 cubic yards of soil from around the historic structures, also removing asbestos containing material (ACM) from buildings set for demolition. Our team demolished more than 40 historic military structures including two one-million gallon above ground storage tanks (ASTs).

In order to convert leachable lead in the soil to non-leachable mixed mineral forms, we developed an innovative approach using the patented MAECTITE® process. We also designed a permanent repository with an engineered cover system for treating the soil by repurposing a former water treatment basin to avoid prohibitive off-site disposal costs, using crushed concrete from the demolished buildings for the engineered cover. We completed a waste stream evaluation and a construction and demolition landfill siting study in preparation for building demolition and prepared both and Spill Prevention Control and Countermeasure Plan (SPCC) and Facility Response Plan (FRP) for the Refuge.

In the end, we safely demolished 40 major structures, abated lead from 30 historical structures, and conducted the treatment, removal, and disposal of more than 32,000 cubic yards of lead-contaminated soil. Our team performed the field sampling with no disruption to on-going Refuge operations and with minimal disturbance to wildlife, restored 1,000,000 square feet of nesting habitat for the endangered birds of Midway. We also authored the final CERCLA NTCRA report.