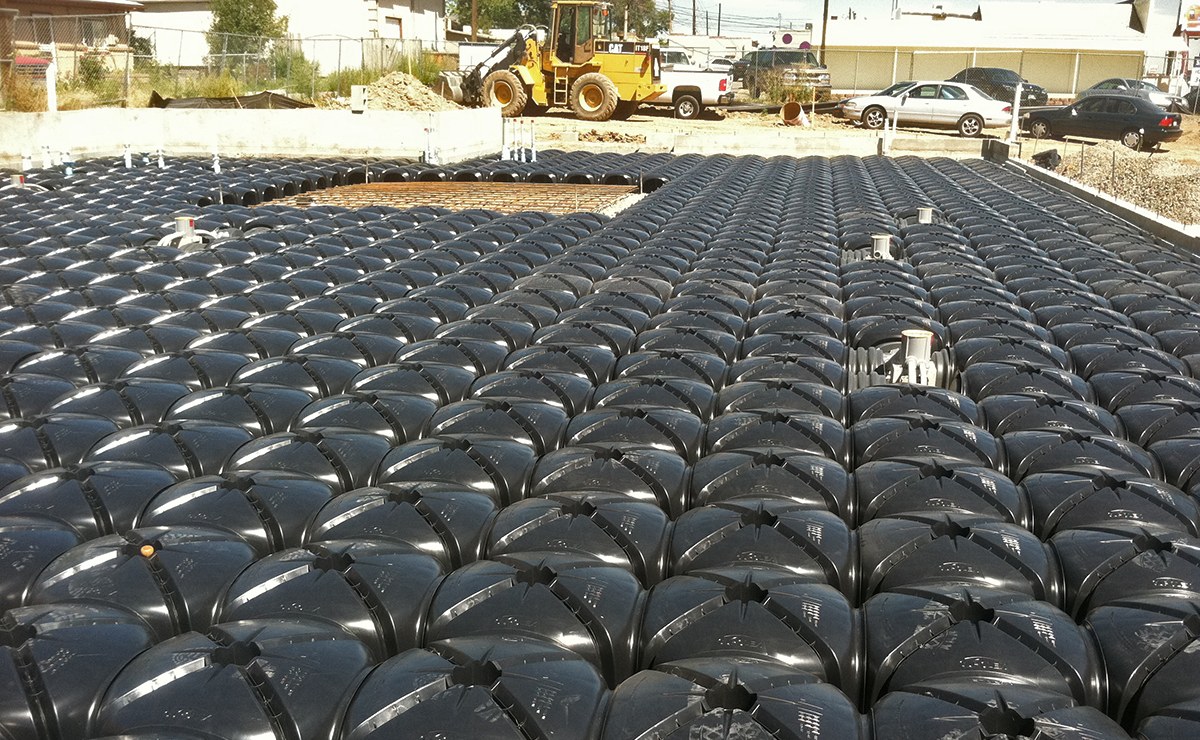 Our client, a banking firm, was building a new 4,000-square-foot bank at a former gasoline station site in Denver. Because some petroleum contamination was still present at the site, the state agency responsible for cleanup of leaking underground storage tank (UST) sites required installation of a vapor intrusion mitigation system in the new building.

Our client was interested in the benefits of a Cupolex® aerated floor system because of its low cost compared to other mitigation systems of comparable performance, as well as the potential for passive and sustainable operation.

Geosyntec designed the venting components of a Cupolex aerated floor for the new bank building (the structural and concrete components of the slab were designed by others). Cupolex consists of recycled plastic forms that are placed on the subgrade before pouring the concrete floor slab. The forms shape the concrete to create a continuous network of void spaces in the bottom of the slab, which can be ventilated. This void space replaces the gravel and perforated pipes of traditional mitigation systems and is much easier to vent (i.e., less resistance to air flow). This results in higher air exchange rates below the slab and more dilution of sub-slab vapors in passive venting mode and high, evenly distributed vacuum levels across the building using a single, small (20W) fan in active venting mode.

Geosyntec designed the system to operate in passive mode, with four ground level inlet vents and vertical risers to two roof-top exhaust vents. The latter could be equipped with solar fans, wind turbines, or could rely on natural drafts due to thermal stack effects.

We directed the installation of the Cupolex forms, the floor was poured by the concrete contractor, and we performed a leak test to ensure that the complete floor was tight. Initial testing discovered an air leak around one of the pipes penetrating the foundation wall. Once sealed, the entire floor could be placed under a 0.5-inch (water column) vacuum with one 20W fan.

Geosyntec designed a state-of-the-art aerated floor system for the new bank building using Cupolex forms, which allowed placing the entire floor slab under a uniform, high vacuum using one small fan. Although some depressurization and good air exchange were also demonstrated in passive mode, the client elected active operation because of the low operating cost (about $100 per year) and high performance of the system. This also convinced the agency that indoor air testing was not necessary to confirm vapor intrusion control. The aerated floor was easy and quick to install using local contractors and cost about $3 less per square foot than an equivalently performing traditional gravel and spray-on liner system.