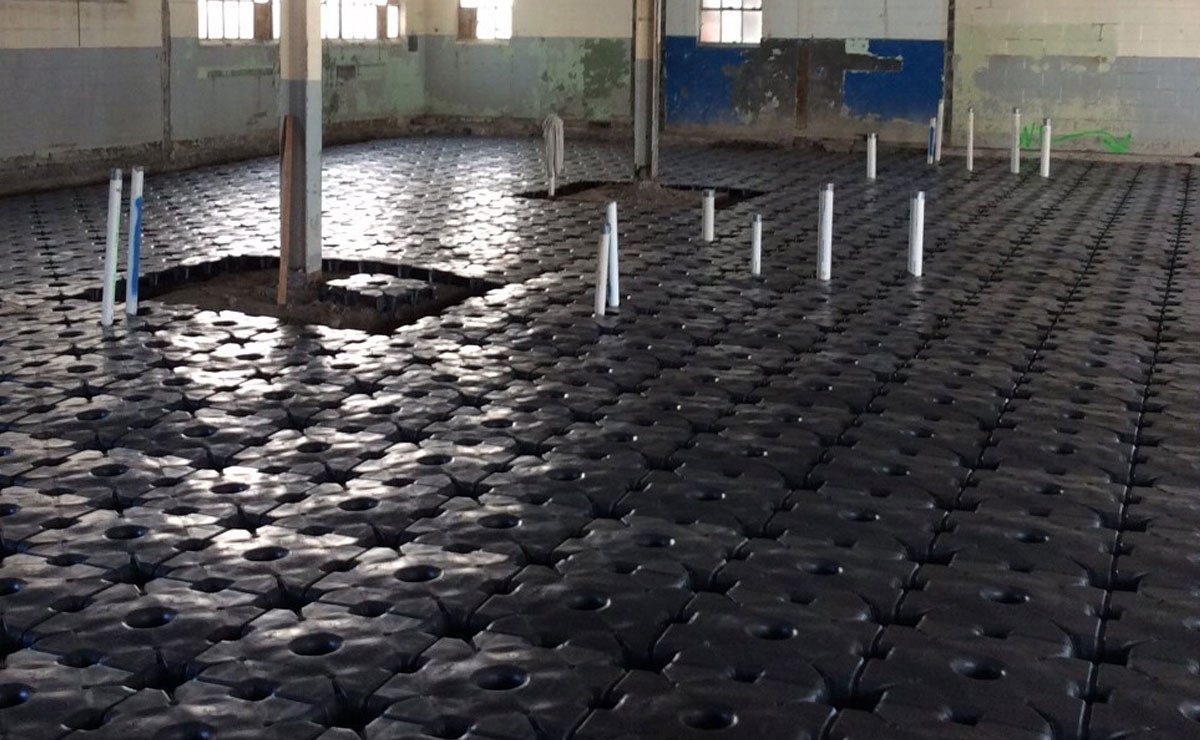 As part of the mixed used redevelopment of a 40,000-square-foot former cutlery manufacturing building in upstate New York, the property's developer was required to mitigate the potential for vapor intrusion. This had to do with compounds released to the environment from past operations at the facility.

In order to control the potential for vapor intrusion of these compounds from the groundwater into indoor air, which could pose a potential health risk to future building occupants, the developer retained Beech and Bonaparte Engineering, P.C., a Geosyntec company providing engineering services in the state of New York (Beech and Bonaparte), to install the Cupolex® aerated floor technology system to mitigate this risk by venting any vapors to the outside of the building.

Beech and Bonaparte recommended the use of Cupolex aerated floor technology to provide a cost-effective solution of vapor intrusion concerns while maximizing the potential for passive operation, meaning no fans or other power source would be required.  We prepared the venting designs for a presumptive, 100% passive system.  We also provided the developer with design drawings for a low-elevation profile system to better conform with existing building grades and reduce the loss of ceiling room.  We also performed construction inspections and conducted vacuum tests on the installed floor to ensure uniform and effective vacuum field extension with small fans. Additionally, we provided support to the developer and their consultants during communications with New York State Department of Environmental Conservation (NYSDEC) staff during the development, construction, and performance testing of the aerated flooring system.

With the potential for a totally passive venting system, Beech and Bonaparte's design is estimated to have saved the client approximately $200,000 over a traditional spray-on liner and gravel system.  Additionally, our innovative design and the use of a Cupolex aerated floor helped the developer successfully replace the historic slab with a new aerated slab without any soil excavation, all while meeting the aggressive project schedule. Our performance testing of the aerated floor demonstrated an evenly distributed vacuum field, indicating a high potential for passive system effectiveness. This substantially reduces the long-term operation and maintenance cost of the system and minimizes institutional controls placed on the building relating to vapor intrusion mitigation.

NYSDEC approved the use of Cupolex and a passive venting design for the site, and Beech and Bonaparte's involvement in the design, management, and performance testing of the venting system contributed to the developer receiving a certificate of completion (COC) from NYSDSEC for remediation at the site.  The COC allows for site redevelopment, provides liability from contamination at the site, and allows the developer to apply for tax credits to offset the costs of remediation and redevelopment.