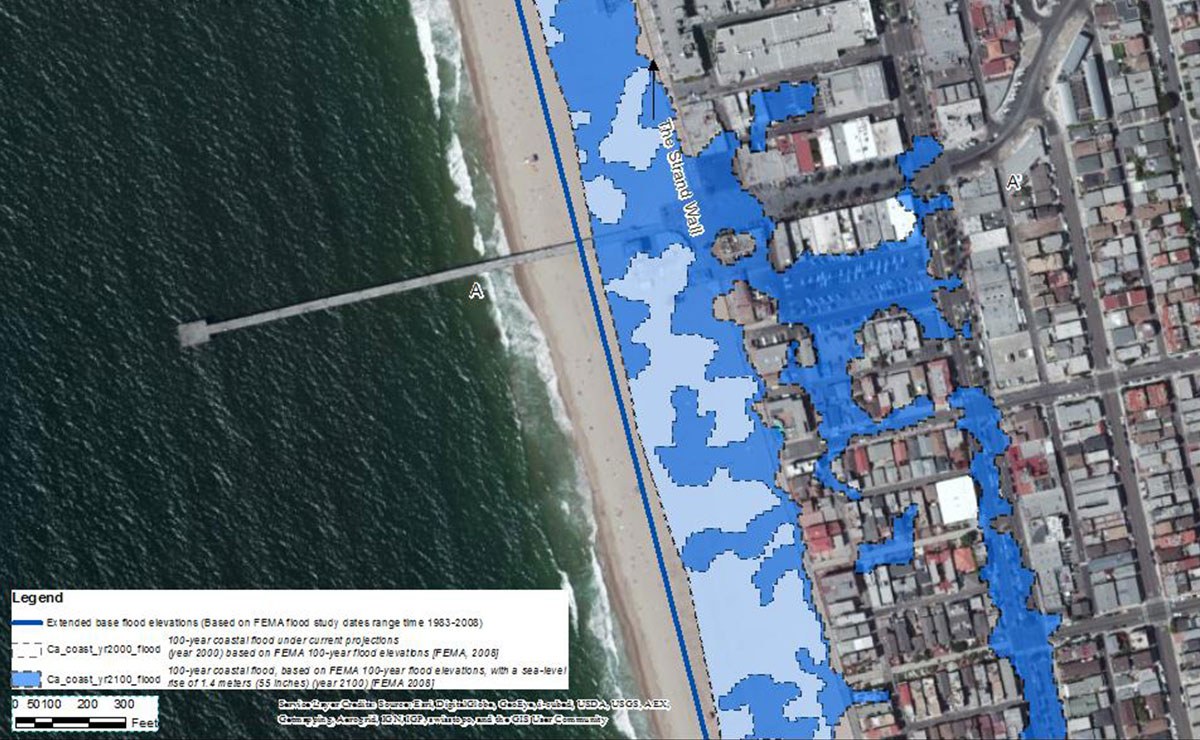 This focused infrastructure vulnerability assessment was funded in part by a Climate Ready Grant from the State of California's California Coastal Conservancy. The project investigated how coastal shallow groundwater elevation and salinity responds to projected increases in sea level rise in sandy, low-lying coastal soils and evaluated the vulnerability of existing sanitary sewer and storm drain infrastructure.

Geosyntec focused on three infrastructure elements: 1) storm drain outfalls that could be inundated at high tide and cause localized flooding; 2) the sanitary sewer collection and conveyance system; 3) and existing and planned storm water infiltration systems and low flow diversions designed to meet stormwater quality standards. Two time horizons were considered: Year 2050 that included a 2-foot sea-level rise projection, and Year 2100 that included a 5.48-foot sea-level rise projection. In addition, 10-year storm events and spring tides were considered. Three monitoring wells were installed in the near coastal region to monitor the response of salinity and groundwater elevations to tidal cycles and rain events for approximately a one-year period. Results of the monitoring were extrapolated to estimate the rise in groundwater elevations due to sea-level rise and spring tides, as a function of distance from the ocean.

The projected groundwater elevations were then analyzed with respect to sewer infrastructure and stormwater management infrastructure. Results indicated that up to 21 sewer segments would be inundated by Year 2050 and 50 segments inundated by Year 2100, resulting in increased risk for groundwater infiltration to the sewer system, sewer system back-ups and overflows, and increase wastewater treatment volumes. Additionally, it was identified that three of the four public restrooms at the beach would be susceptible to flooding. Assessment of stormwater management infrastructure indicated effects ranging from reduced infiltration and stormwater storage capacity by Year 2050 to complete inundation by Year 2100. Finally, a typical storm drain outfall was analyzed for the different scenarios using U.S EPA's Storm Water Management Model (SWMM). The modeling indicated only minor effects, with additional surcharge and surface flooding only predicted for Year 2100 sea-level rise coupled with a 10-year spring tide event.

Geosyntec assisted the City of Hermosa Beach in conceiving, developing and submitting a grant proposal to the California Coastal Conservancy's competitive Climate Ready Grant program. Once the grant was awarded, Geosyntec  assisted the City in identification of and planning mitigation measures for critical infrastructure vulnerabilities that can serve as a template for other communities along the coast.