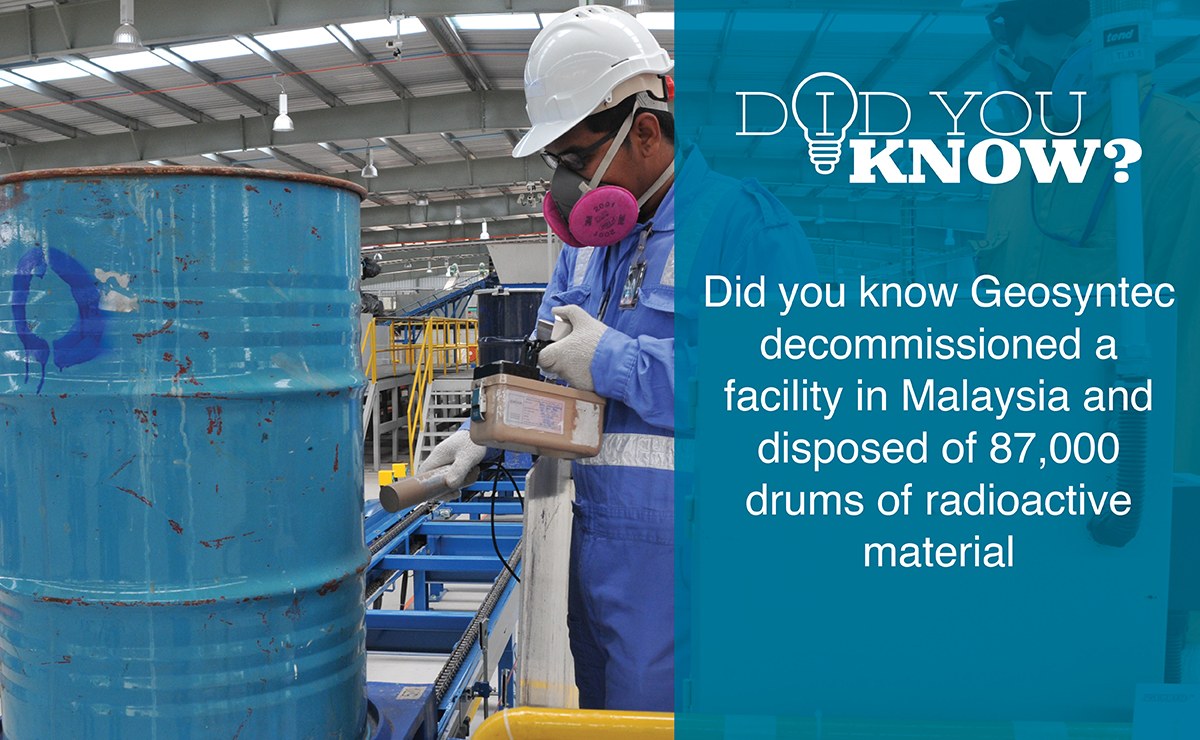 Geosyntec was the design-build Contractor for two projects involving the remediation and disposal of low-level Naturally Occurring Radioactive Material (NORM) wastes at two sites in Malaysia.

These sites are associated with a plant that extracted rare earth elements from local tin ores. Because of the naturally occurring radioactivity contained in the raw materials, these productions were accompanied with by-products and residues containing low-level thorium hydroxide and uranium hydroxide. The total mass of uranium (~120 tons) and thorium (~1,200 tons) planned to be managed in a single repository meant that the project design needed to be compliant with the International Atomic Energy Agency (IAEA) requirements related to inventory, security and safeguards around nuclear precursor materials.  The requirement to consider a design life more than 10,000 years led to significant challenges in design and modeling of the disposal facility.  This is one of the few facilities that was purposely designed and permitted as a final disposal for low level wastes.

The first project was the decommissioning, decontamination, and demolition of the 14-acre former rare earth processing plant and excavation of contaminated soil; construction of an engineered cell for waste disposal; and transportation and disposal of the waste materials into the cell. Final status surveys were carried out to allow the site to be successfully released by the Malaysian regulatory authorities as a clean site for re-development as common industrial use. Over 11,000 loads of material, including approximately 75,000 cubic meters of excavated soils and plant debris were transported on public roads for disposal in the engineered cell using specially designed steel transport boxes.

The second project included the design and construction of a second engineered cell, enhanced with protective barrier systems and a final cover system constructed of natural materials. Ancillary facilities such as substations, offices, processing buildings, and wastewater treatment plants were constructed to support retrieval and processing of the materials from more than 87,000 individual drums using a semi-automated process. The drums, waste packages, and other materials in the storage facility were systematically extracted, sorted, inventoried, solidified using Portland cement, transported, and disposed in the cell. All temporary facilities were decontaminated, demolished, and disposed in the cell. Radiological inventory and radiation safety programs were implemented to quantify the waste activity and to control exposure to workers and the public during the project. An environmental monitoring program was carried out for over two decades with sampling and measurements taken at over 120 locations within 10 km of the project sites. The total radioactive contaminated waste disposed in the two projects is nearly 200,000 tons.

The projects started in 1992 and were successfully handed over to the state government in Malaysia in November 2017. The entire project was carried out under a high level of scrutiny from Malaysian and international regulatory bodies. For the last two years, Geosyntec conducted performance monitoring and modeling activities to demonstrate that the disposal facility was performing in accordance with design requirements established by regulatory agencies. The projects were completed with more than 5,000,000 labor-hours without either a lost-time accident or a radiological incident.