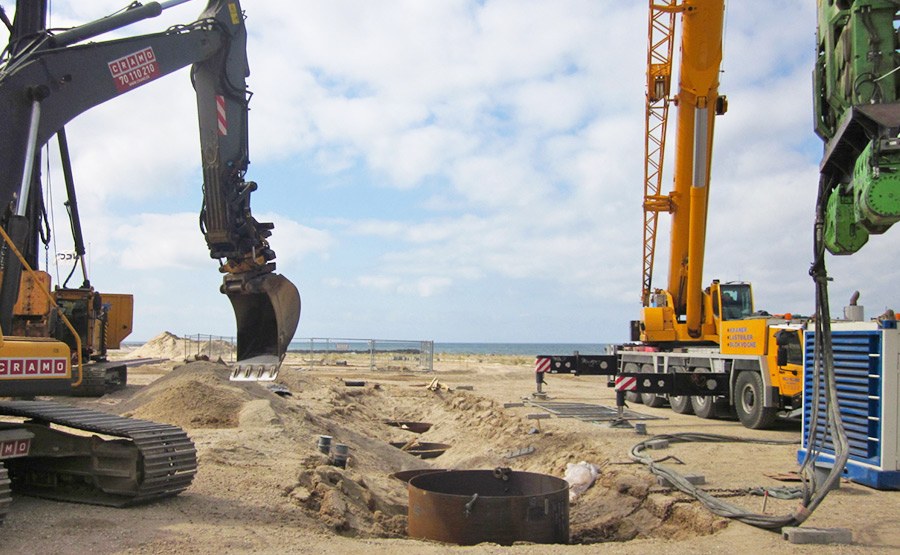 The Høfde 42 pesticide waste disposal site is recognized as the most toxic contaminated site in Denmark.  Between 1953 and 1962, the agrichemical manufacturing company Cheminova, with approval of Danish authorities, disposed of hundreds of tons of organophosphorus pesticide (OPP) and pesticide manufacturing wastes in pits at this site, which is located at a beach adjacent to the North Sea.

Although portions of the site were excavated in the 1970s, an estimated 160 tons of parathion remain, and an additional 100 tons of other pesticide manufacturing wastes are also present, including methylparathion, malathion, sulfotep, and mercury.  As pure phase parathion has a density greater than water, a significant fraction of the wastes in the subsurface at the site are present as dense nonaqueous phase liquids (DNAPLs).  The acute toxicity of these chemicals and odors at the beach prompted the Danish government to close the beach and install a 14 m deep sheet pile containment wall around the entire site.  Despite these containment measures, contamination from the site continues to leach to groundwater and discharge to the sea, posing both an ecological and human health risk.  A remedial feasibility study completed by the Danish government determined that in situ alkaline hydrolysis (ISAH) is the most cost-effective technology for remediating groundwater and the residual wastes at the site. The Danish government, with funding by the European Union Life Program, selected the team of Geosyntec, COWI A/S, Tufts University, Nasus Water, and the University of Aalborg to conduct three pilot tests to compare three techniques for optimizing pesticide treatment by ISAH: 1) groundwater recirculation; 2) surfactant-enhanced flushing; and 3) acoustic vibration.  In all three tests a primary challenge was to inject strong base [caustic, or sodium hydroxide (NaOH)] to the in situ treatment zone while minimizing exposure of site workers to NaOH and pesticides.

The Geosyntec team performed the three pilot tests in individual 10 m x 10 m sheet-piled test cells and three accompanying large diameter test pipes within the primary OPP-impacted area at the site. ISAH in each test cell was achieved via injection of NaOH to achieve a pH > 12 to catalyze hydrolytic destruction of the pesticides. Geosyntec provided technical direction for all phases of the project, including overall experimental design, NaOH injection, performance monitoring, data analysis, and reporting.  For the recirculation pilot test cell, Geosyntec's scope focused on designing the number and placement of recirculation wells, as well as the recirculation rate, with the goal of optimizing contact time with NaOH.  For the surfactant enhanced pilot test, Geosyntec and Tufts University directed bench tests to determine effective surfactants to solubilize and desorb OPPs at a pH of 12. For the acoustic vibration pilot test, Geosyntec directed the selection of acoustic vibration equipment, the vibration frequency, and methods for quantifying the effects of vibration.  The pilot tests successfully demonstrated that ISAH can be an effective tool for in situ treatment of pesticides, and that recirculation and surfactant application significantly improves NaOH delivery and mass removal of OOPs. Geosyntec's rigorous field test of in situ acoustic vibration for DNAPL remediation is the first such design and analysis performed anywhere in the world.  This has included development of a novel field approach to deliver acoustic vibration for DNAPL remediation.