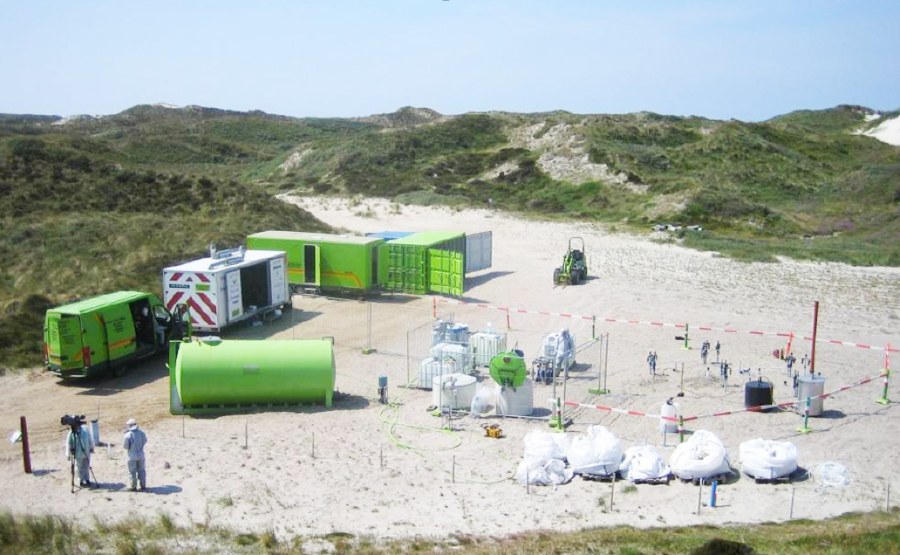 Groundwater in Denmark that has been contaminated with chlorinated solvents is often remediated using in situ chemical oxidation (ISCO) with permanganate, or bioremediation via in situ enhanced biological reductive dechlorination (ERD).  Although ISCO using Fenton's reagent is a commonly used technology in North America for remediation of chlorinated solvents present in the subsurface as dense nonaqueous phase liquid (DNAPL), in Denmark the technology is still considered relatively unproven.

Despite skepticism regarding Fenton's reagent, as part of a prior phase of work, Geosyntec successfully convinced the Danish government that the technology may offer a cost-effective solution for treating a complex mixture of chlorinated solvent DNAPL, fuel hydrocarbons (benzene, toluene, ethylbenzene, and xylenes [BTEX]), and pharmaceutical wastes beneath the Kærgård Plantage megasite in Jutland. A treatability study directed by Geosyntec demonstrated that chemical oxidation with Fenton's reagent is capable of treating > 99% of the organic wastes in groundwater at the Site.  Subsequently, the Danish government selected the team of Geosyntec, ISOTEC, COWI, Ramboll, and the University of Aalborg to design and perform two ISCO pilot tests at the Kærgård site.  These pilot tests were performed in a tetrachloroethene (PCE) DNAPL-impacted sand aquifer beneath a former waste disposal pit.  The first test involved ISCO only, and consisted of four injections of modified Fenton's reagent (neutral pH formulation of hydrogen peroxide and iron) over a six-month period. The second test involved sequenced ISCO-ERD, and consisted of two injections of modified Fenton's reagent, followed by two injections of ERD additives. The objective of the tests was to quantify and compare the performance of Fenton's reagent and sequenced Fenton's-ERD, respectively, for treatment of the complex contaminant mixture at the Site.  The results of these tests will be used to support selection of a technology for full-scale remediation.

Geosyntec led the design and data analysis of the sequenced Fenton's-ERD pilot test. With this test, the goal was to use ISCO to oxidatively treat the veterinary antibiotics and BTEX, followed by ERD to reductively treat chlorinated solvents that remained post-ISCO.  Prior to the test, the client expressed concern about the feasibility of creating an ERD bioactive zone in a treatment zone that had been sterilized via chemical oxidation.  Geosyntec developed a mixture of bioremediation additives to create an ERD bioactive zone, post-ISCO that would successfully stimulate reductive dechlorination of PCE to ethene, a desired non-toxic end product.  The mixture consisted of emulsified soybean oil, sodium carbonate to buffer acidity caused by Fenton's reagent, and KB-1®, a consortia of dechlorinating bacteria that dechlorinates PCE to ethene.  Results of the test demonstrated that implementation of a properly designed ERD system, post-ISCO, can neutralize pH, achieve strongly reducing conditions, grow dechlorinating (Dehalococcoides) bacteria, and ultimately dechlorinate solubility concentrations of PCE to ethene.  Within a 230 yd3 treatment volume, sequenced Fenton's-ERD destroyed an estimated 730 lb. of PCE, BTEX, and veterinary antibiotics.

Geosyntec led the design and analysis of one the first rigorous field tests of sequenced tests Fenton's-ERD performed anywhere in the world.  Our test demonstrated that a bioactive anaerobic zone can be effectively engineered in an aquifer zone previously treated with strong chemical oxidants. Our results suggest that for many chlorinated solvent sites, sequenced Fenton's-ERD may be a more cost-effective remedial approach than Fenton's reagent alone.