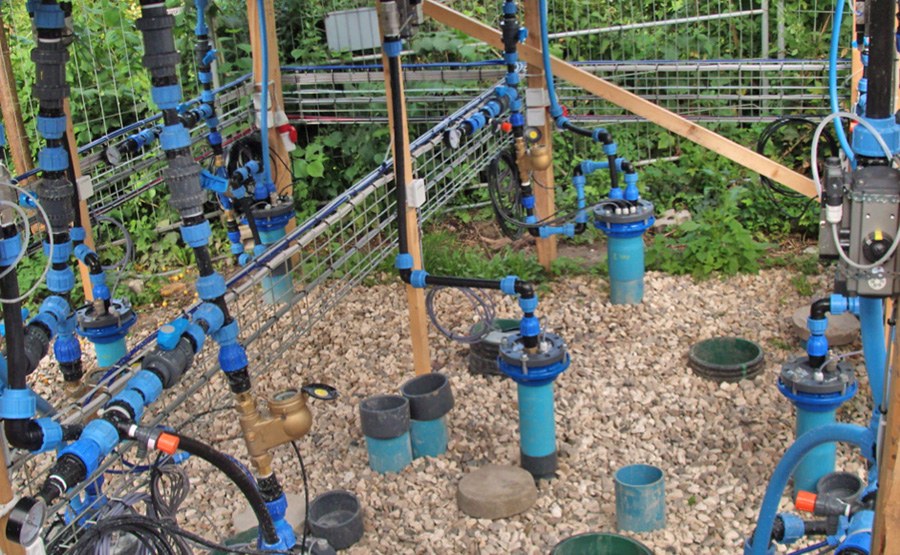 A significant portion of the near-surface geology in Denmark is comprised of glacial moraine deposits, much of which consists of clayey till. Consequently, subsurface releases and spills of chlorinated solvents at industrial facilities in Denmark often end up as a sorbed phase or nonaqueous phase liquid (NAPL) that resides in clayey till. After a chlorinated solvent has escaped into subsurface clay, it can be extremely difficult and costly to recover the solvent or remediate the clay due its very low permeability.

In situ remediation technologies that may succeed at treating chlorinated solvents in sand and gravel aquifers often will fail in clayey till. Electrokinetic-enhanced bioremediation (EK-BIO) is an innovative technology for improving remediation in low-permeability formations such as clay till by using direct current (DC) electric fields to facilitate subsurface transport and delivery of bioremediation agents such as electron donors and dechlorinating bacteria. Recognizing that Geosyntec is one of the only engineering consulting firms that possesses expertise with this technology, the Capitol Region of Denmark retained the team of Geosyntec, NiRAS, and the U.S. Army Environmental Research and Development Center (ERDC) to design and execute an EK- BIO pilot test in clayey till at a Danish site.

Geosyntec directed a bench-scale treatability test in collaboration with ERDC and Northeastern University. PCE- impacted soil collected from the test site was consolidated into EK reactors. A DC power supply maintained a current density of 0.5 A/m2 within the reactor. After verifying lactate transport across EK reactors with pore-water sampling results, a dechlorinating microbial culture (KB-1®) that contains Dehalococcoides bacteria (Dhc) was added to the electrode compartments and an injection well. Pore-water samples collected during the subsequent EK operation were analyzed for volatile organic compounds (VOCs), dissolved hydrocarbon gases, and vinyl chloride reductase gene (vcrA) to assess the distribution and activities of the augmented Dhc culture. Based on the success of the bench test, Geosyntec led the design of an EK-BIO field pilot test, and oversaw start-up operation of the pilot test system in the field.

This project represents the first laboratory EK-BIO application involving bioaugmentation, and the first rigorous field pilot test of EK-BIO anywhere in the world. The laboratory results indicated that EK significantly enhanced distribution of added electron donor and Dhc in the clay. Within 25 days following the bioaugmentation, Dhc levels detected in the EK reactor effluent exhibited strong signals of dechlorinating populations and significant increases in dissolved ethene, providing a direct indication of stimulated reductive dechlorination. The ongoing success of this project suggests that EK-BIO might offer a cost-effective solution for the vexing problem of chlorinated solvents in low- permeability materials.