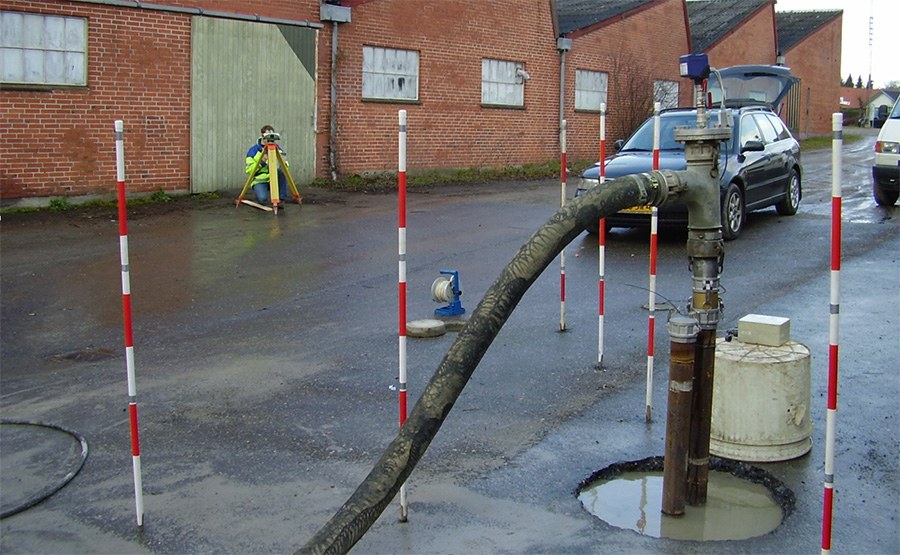 Until recently, biological in situ enhanced reductive dechlorination (ERD) was not a proven or validated technology in Denmark. Chlorinated solvents in groundwater are recognized as a widespread problem throughout the country, and the Danish government has funded a significant body of research to develop technologies for restoration of impacted groundwater impacted. For the former Funen County (now the Region of Southern Denmark) and the Danish Environmental Protection Agency, the team of Geosyntec, COWI A/S, and the Technical University of Denmark (DTU) developed a scoring protocol for determining the suitability of a given chlorinated solvent-contaminated site for treatment by ERD.

The project team developed a rigorous ERD pilot test design that involved injection of electron donor and Dehalococcoides bacteria (KB-1®) into two sand fractures hydraulically emplaced within clayey till. The till had been impacted with residual cis-1,2-dichloroethene (cDCE) and vinyl chloride (VC), two trichloroethene (TCE) daughter products from a historical release. The ERD design goal was to establish dechlorinating bioactive zones within the sand fractures, and to facilitate mass transfer (desorption) of cDCE and VC from the clay into the fractures. To distinguish the two fractures in soil cores, the team used a red sand for the shallow fracture, and a green sand for the deeper fracture. The fracturing radius of influence (ROI) was assessed initially via a topographic survey and more intensively through soil coring. Small diameter wells were installed across the emplaced fractures to provide monitoring points for the ERD test.

Geosyntec led the design of the ERD system electron donor (emulsified soybean oil and lactate [ESO]) and bioaugmentation dosing, contributing significantly to the data analysis. The test results showed that cDCE and VC in the fractures were completely dechlorinated to innocuous products within five months of ESO and KB-1® injection. Results also showed that a bioactive zone was established that successfully enhanced mass transfer and treatment of cDCE and VC in the clay.

This project that Geosyntec helped design and lead represents the first rigorous demonstration of ERD in low- permeability clay ever reported in peer-reviewed literature. The successful results offer promise for remediation in Denmark and many other locations where chlorinated solvent contamination often occurs in clay till. The high- quality experimental approach and data generated in this project were described in a journal article in Environmental Science and Technology that was co-authored by Geosyntec (see: http://pubs.acs.org/doi/abs/10.1021/es1003044).