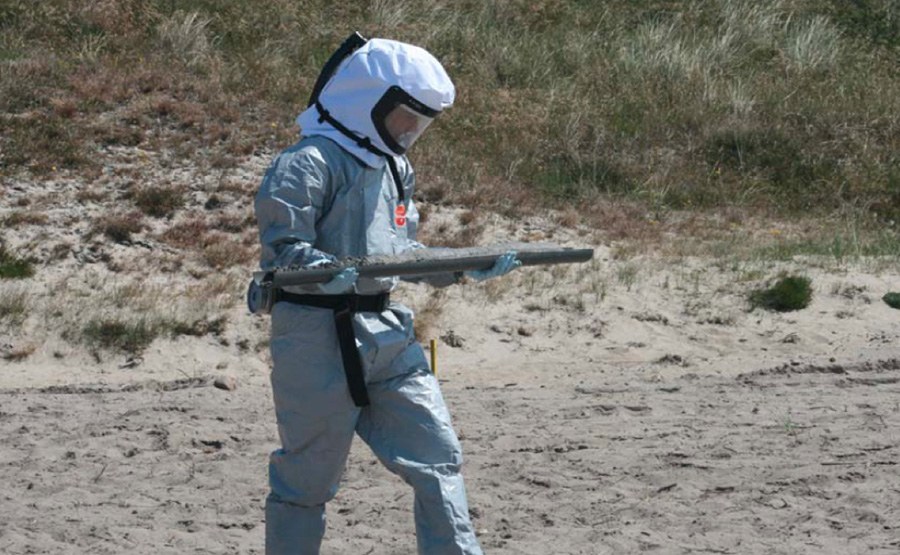 Groundwater supplies beneath the Kærgård Plantage pharmaceutical waste disposal site in Denmark are contaminated with substantial quantities of chlorinated solvents [primarily tetrachloroethene (PCE)], which are present in the subsurface as dense nonaqueous phase liquids (DNAPLs). Contaminated groundwater from the site discharges to the nearby North Sea and has created a potential human health and ecological risk at a beach adjacent to the site.

Since 2004, Geosyntec Consultants (Geosyntec) has been advising the Danish government regarding the remedial strategy for cleaning up the site and mitigating risks at the beach. At Geosyntec’s recommendation, the Danish authorities retained a team of consultants with a goal of evaluating the feasibility of three technologies for remediating the primary DNAPL source areas at the site: in situ biological enhanced reductive dechlorination (ERD), in situ chemical oxidation with Fenton’s reagent, and in situ thermal remedial via steam flushing. The ERD pilot test was deemed to be particularly important because the performance of the technology for treatment of highly contaminated DNAPL source areas had not yet been demonstrated in Denmark. While ERD performance for dissolved-phase chlorinated solvents had already been demonstrated in Denmark, the capabilities of the technology were less certain for DNAPLs. Geosyntec successfully led the negotiations with the Danish EPA that resulted in selection of ERD for pilot testing at Kærgård Plantage.

As a first step in the ERD design process, Geosyntec designed and directed a bench treatability study at our SiREM Laboratory (www.siremlab.com) to confirm treatment of DNAPL in aquifer samples from the site and to quantify parameters for design of an ERD pilot system (e.g., treatment rates with and without bioaugmentation with KB-1®, electron donor and pH buffer dosages). The treatability test successfully confirmed that PCE in site groundwater at a concentration of 30 mg/L could be completely dechlorinated to ethene using ERD, and that bioaugmentation enhanced the process. The test also showed that dechlorination can enhance dissolution of DNAPL at the site. Subsequently, Geosyntec designed an ERD pilot test system and monitoring program for implementation in one of the DNAPL source areas at the site (a former waste disposal pit).

The system we designed involved addition of electron donor (lactate and ethanol) and pH buffer (carbonate and bicarbonate) via continuous groundwater recirculation within a 25 meter-long test area. Continuous recirculation was deemed necessary to facilitate flushing, DNAPL dissolution, and enhanced delivery of bioremediation additives. After eleven months of operation, the greater than 50% of the PCE in the pilot test plot was dechlorinated to cis-1,2-dichloroethene, vinyl chloride, and ethene, and enhanced dissolution of DNAPL was evident. Dechlorination was accompanied by significant growth of dechlorinating bacteria (Dehalococcoides) and isotopic enrichment in 13C chloroethene daughter products.