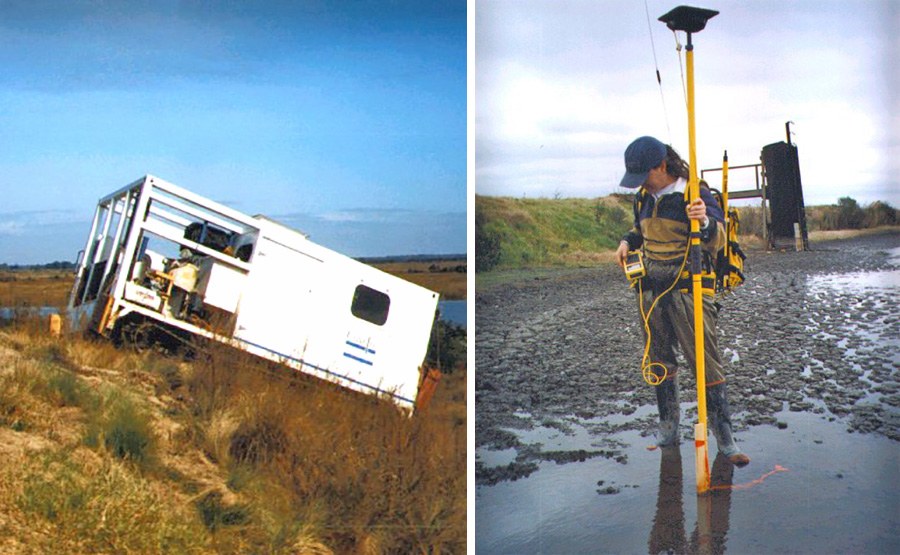 The Savannah River Harbor requires periodic dredging to support commercial shipping traffic. These materials are disposed within a series of diked, dredged material containment areas (DMCAs) located on the eastern side of the Savannah River in Jasper County, South Carolina. Under mutual agreement, the US Army Corps of Engineers dredges the materials from the Port and disposes the materials in specific DCMAs identified by the Chatham County (Georgia) Engineers Office. Under this agreement, the Georgia Department of Transportation (GDOT) is responsible for the design and maintenance of the DCMAs which occupy 5,635 acres of land and are bounded by nearly 44 miles of front, back, and divider dikes. Part of this responsibility is to design and stage the requisite dike raisings to provide sufficient dredged materials storage capacity along an 18-mile long reach of the river. At the time of the project, the previous two dike raisings initiated a series of relatively small and localized slope stability failures. Relatively expensive short-term stability measures had to be developed by GDOT to provide the requisite storage capacity. GDOT's primary objective for the project was development of a strategy for optimizing dike construction and DMCA management so that cost-effective long-term dredge material containment could be provided.

Geosyntec's approach to this challenging project was to: (i) characterize the existing subsurface conditions in each DMCA; (ii) characterize the as-built cross-section of the existing dikes; and (iii) develop a closed-form analytical methodology that would facilitate the development of a preliminary dike raising design and associated cost estimate. Geosyntec engineers began the project by reviewing the GDOT project files for previous dike designs and construction records. The paper files were incomplete and the dike raising designs were found to vary considerably along the length of each dike. Building on this historic information, Geosyntec developed a geographical information system (GIS) model of the entire project site and was able to attribute specific designs to the entire length of the perimeter dikes. The GIS model also included a layer to report several hundred historic subsurface geotechnical boring logs recovered from the referenced binders. These efforts led to the development of a stratigraphic profile of each DCMA. Using the compiled site characterization model, areas were identified where representative subsurface stratigraphy could be confirmed and where samples could be obtained for supplemental characterization testing by Geosyntec. Geosyntec identified similarities within several of the DMCAs significantly reduced the supplemental testing requirements. Using the data from the historic records and the new borings, Geosyntec geotechnical engineers prepared a the comprehensive site characterization model. Geosyntec then developed a closed-form analytical technique in a spreadsheet format that supported preliminary dike raising designs at any location at the site. The analytical model output presented the calculated factor of safety, the reinforcement requirements, and the cost for the particular section. The results of the preliminary analyses were then used in the development of the final dike raising design.

This project highlighted the value of using a GIS model to present geotechnical site characterization information. At the time of this project (circa 1997), GIS modeling techniques in geotechnical engineering were in its infancy. Geosyntec was a pioneer in advancing the concept and demonstrating the significant benefits of the technology. Geosyntec also demonstrated that it was possible to develop a site characterization model for an enormous site utilizing limited information coupled with sound geotechnical engineering principles. Subsequent borings advanced at the site have confirmed the validity of the initial site characterization. Another accomplishment was the ability to develop modeling and analysis tools that would have immediate and long-term benefits to the client. GDOT and Chatham County personnel who were historically involved in the project continue to apply the GIS model and closed-form analysis spreadsheet to the management of the DMCAs.