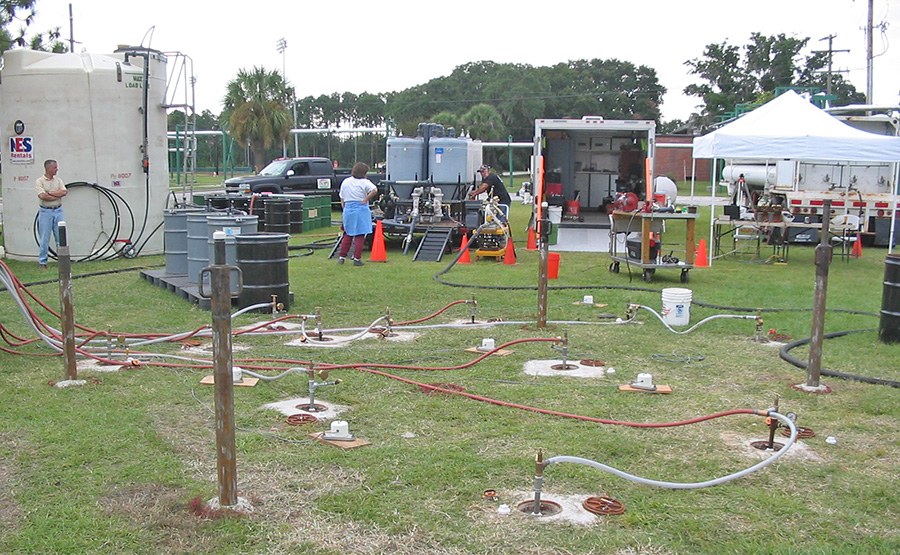 NASA's Launch Complex 34 (LC-34) at Cape Canaveral Air Force Station was used for Saturn rocket launches between 1959 and 1968, and is the site of historic releases of trichloroethylene (TCE) used for rocket maintenance activities. It is estimated that up to 88,000 lbs. of TCE are present in the aquifer below LC-34 as a dense, non-aqueous phase liquid (DNAPL), suggesting that restoration of the aquifer through natural remediation processes would take decades. NASA has a strong interest in evaluating and implementing cost effective methods for accelerating in situ remediation of the TCE at this and other site.

NASA contracted Geosyntec to conduct a field demonstration to evaluate the technical and cost performance of emulsified zero-valent iron (EZVI) as a technology when applied to DNAPL contaminants in the groundwater. The EZVI technology was originally developed and tested in the laboratory by researchers at the University of Central Florida (UCF) and at NASA, but had not been tested under field conditions. EZVI is composed of a surfactant, biodegradable oil, water, and nano-scale zero-valent iron (ZVI) particles in an emulsion and has been shown to enhance the degradation of chlorinated solvent DNAPL in source zones. When EZVI is injected into the subsurface, TCE diffuses through the oil membrane of the emulsion particle and undergoes reductive dechlorination due to the ZVI particles. The dechlorination reactions produce non-toxic hydrocarbons as an end-product that then diffuse out of the emulsion into the surrounding aqueous phase. The oil component of the EZVI also provides electron donor to promote biodegradation of residual TCE that may not have degraded by the ZVI. Geosyntec conducted a demonstration test at LC-34 in an area known to contain TCE DNAPL. We worked with NASA and UCF to formulate the EZVI and injected the material into the subsurface, and conducted groundwater monitoring before and after injection of the EZVI to evaluate the technology.

Based on our success with the EZVI demonstration, NASA funded Geosyntec to conduct additional work at LC-34, including a field evaluation of different injection methods for EZVI. The work involved evaluating four different injection techniques (direct injection, pneumatic injection, hydraulic fracturing and injection, and pressure pulse technology) to determine which techniques are best able to distribute the EZVI in the subsurface over a large area without damage to the structure of the emulsion.

Geosyntec and NASA have also been awarded funds from the Department of Defense Environmental Security Technology Certification Program (ESTCP) to conduct additional lab testing and another field-scale demonstration of EZVI technology. The laboratory tests have been completed, but results from the field test are not yet available.