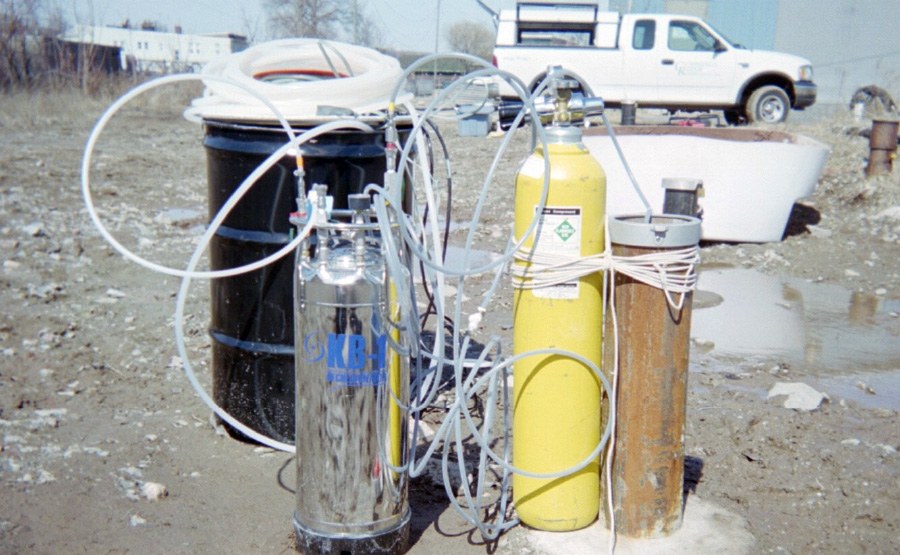 Bioaugmentation to Treat Chlorinated Solvents in Fractured Bedrock
« All Projects

Geosyntec determined that native microorganisms in the subsurface had the ability to degrade the target compounds, principally trichloroethene (TCE), but in some cases, this native dechlorinating activity was stalling with the production of daughter compounds such as vinyl chloride (VC) and cis-1,2-dichloroethene (cis-DCE). The relatively high concentrations of these compounds indicated that reductive dehalogenation was not resulting in complete dechlorination of TCE to simpler, non-toxic breakdown compounds.

Based on these conditions, bioaugmentation was selected as the remediation technology to be field tested. Emulsified soybean oil with lactate (electron donor) and KB-1, a natural, nonpathogenic microbial consortium containing several strains of Dehalococcoides ethenogenes, were chosen for testing. Two methods of culture and donor addition were performed; passive injection in one area of the site, and injection followed by temporary groundwater pumping (to induce a hydraulic gradient and draw the injected materials through the rock fractures) in another.

In just a matter of months, Geosyntec's use of Dehalococcoides ethenogenes to bioremediate chlorinated solvents in fractured bedrock has resulted in initial remediation rates of over 98%. In addition, due to the relatively small size of the system required to accomplish this, site redevelopment activities have been able to progress unimpeded, saving significant time and expense for the site owner.