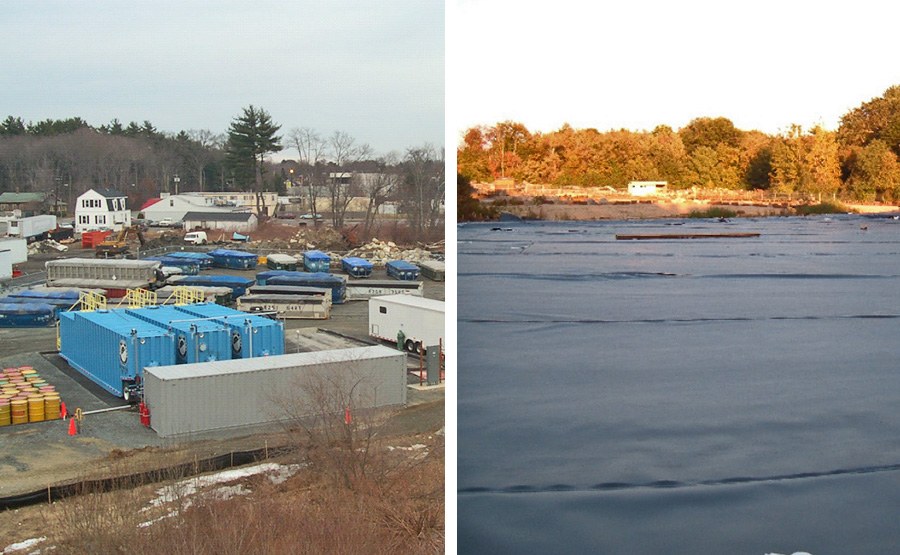 The 6-acre St. Germain Site in Taunton, Massachusetts had formerly been used as a heavy equipment staging and storage area. The former site owner operated a waste hauling business and had buried drums and impacted soils on the property from multiple offsite sources. In 1999, U.S. EPA initiated a Time Critical Removal Action at the site and subsequently excavated over 700 drums from the subsurface. In May 2000, the property owner and a nearby manufacturer were issued an Administrative Order on Consent (AOC) by the U.S. EPA and later a Notice of Responsibility (NOR) by the MassDEP. The corporate successor of that firm retained Geosyntec to perform an initial site investigation at the site in 2000. Geosyntec provided oversight for the AOC and NOR mandated excavation of 4,000 buried drums and 12,000 cubic yards of soil. During these activities, a complex mix of contaminants was identified, including petroleum hydrocarbons, chlorinated ethenes and benzenes, a number of other volatile and semi-volatile organic compounds, and proprietary chemicals.

During the site investigation, Geosyntec found certain contaminants in on-site surface water and off-property sediments and surface water. Geosyntec completed the assessment of sediments, surface water, and groundwater discharge zones through direct and passive diffusion sampling. Additionally, impacts to shallow groundwater at a neighboring residential property led to a vapor intrusion investigation. We completed a detailed evaluation of vapor intrusion at the nearby residence using groundwater, soil gas, and indoor air sampling over a two year period. We then installed a passive sub-slab depressurization system in the neighboring residence. Post-mitigation monitoring data demonstrated that this system eliminated vapor intrusion issues in the home. After completion of the initial drum removal, Geosyntec managed and provided oversight of several additional removal actions to address sediment and residual soil contamination. One of these removal actions was completed in March 2003 under a Release Abatement Measure (RAM) Plan and included the removal of residual soil contamination which was inaccessible during the AOC and NOR mandated removal actions. Since performing the initial site investigation in 2000, Geosyntec has guided the site through the Massachusetts Contingency Plan (MCP) process including a Phase II Comprehensive Site Assessment (CSA), Phase III Remedial Action Plan (RAP), Phase IV Remedy Implementation Plan (RIP), and ultimately closure of the site through Activity and Use Limitations (AULs). Based on our analysis of data collected during the site investigation, a Phase III (RAP) was submitted to the MassDEP in February 2004. The RAP selected monitored natural attenuation (MNA) as the remedial action for shallow and deep groundwater contamination at the site. As part of the remedy we designed a two-acre composite cap to prevent exposure to, and reduce infiltration through, residual soil contamination.

Geosyntec completed the construction of the cap for the site in a design/build relationship with a subcontractor, thus saving the client substantial costs. Our innovative approach to the design/build of the cap and a monitored natural attenuation remedy for the contaminated groundwater saved the client about 12% of the original remedy implementation costs.