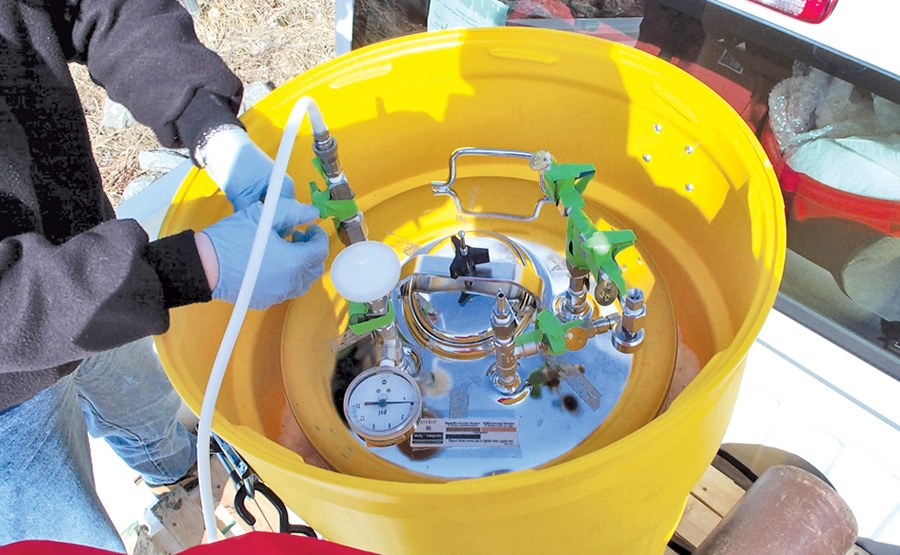 The primary manufacturing processes at Crown Risdon's 11.5-acre former Cosmetic Container Division Facility involved metal finishing operations. This resulted in the groundwater becoming contaminated primarily with chlorinated solvents, specifically chlorinated ethenes and ethanes such as 1,1,1-trichloroethane (TCA); trichloroethene (TCE); tetrachloroethene (PCE); cis-1,2-dichloroethene (cis-DCE), 1,1-DCE; and 1,1-dichloroethane (DCA). The two areas of concern are a former lagoon area and the former metal finishing area, each of which has high levels of chlorinated ethenes and ethanes at concentrations in groundwater that suggest the presence of dense non-aqueous phase liquid (DNAPL). Concentrations as high as 65 ppm TCA and 26 ppm TCE have been measured in the groundwater at this facility.

Historical groundwater analytical results indicate that very limited natural attenuation of dissolved chlorinated solvents is occurring. There is an existing groundwater hydraulic containment system, designed by others, that is also operating to capture and treat extracted groundwater. While this system will prevent off-site migration of the chlorinated solvents, it is not expected to effect significant removal.

Geosyntec reviewed the existing RCRA Facility Investigation Report and the Groundwater Hydraulic Containment Interim Corrective Measure Semi-Annual Status. The geochemical and concentration data contained in these reports indicated that enhanced in situ bioremediation (EISB) would be the most cost-effective approach to accelerating the limited remediation already taking place and could be readily implemented to complement the current groundwater extraction and treatment system. Other technologies considered included zero valent iron (ZVI) and chemical oxidation (chemox). These technologies were rejected based mainly on economic considerations and the potential need to remediate the Site as an active facility. Both the size of the impacted area as well as the concentrations of the COCs would make both ZVI and chemox more expensive remedial options.

Groundwater and soil were collected from an area with TCA concentrations of 30 ppm and TCE concentrations of 6 ppm. These materials were used to conduct a microcosm study to test the efficacy of bioaugmentation with KB-1 Plus, a bacterial consortia that degrades chlorinated ethenes and ethanes under anaerobic conditions. The results of this study showed complete degradation of the DNAPL concentrations of chlorinated solvents in approximately four months. A pilot scale demonstration, to be conducted in the highest concentration area of the site, is currently being designed.

Geosyntec's successful demonstration of an innovative application of bioaugmentation to augment an existing groundwater extraction and treatment system using microbial consortia to degrade both the chlorinated ethenes and the chlorinated ethanes into non-toxic end products has the potential to save our client substantial time and money over the use of conventional groundwater extraction and treatment alone.