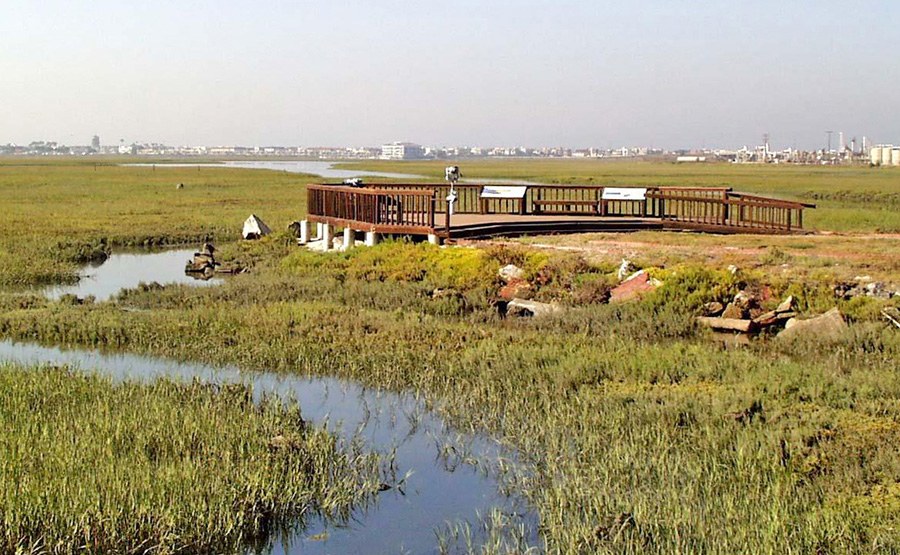 Evaluation of the Ecological Impact from MTBE on the Seal Beach National Wildlife Refuge at a Naval Weapons Station, Seal Beach, California
« All Projects

The Seal Beach Naval Weapons Station provides weapons storage, loading, maintenance, assessment, and support to ships and submarines of the U.S. Pacific Fleet. Fully contained within the Station is the Seal Beach National Wildlife Refuge (SBNWR), a 400+ acre wetland and estuary habitat. Site 14 is a former underground storage tank (UST) site at the Naval Weapons Station where leaks and spills led to subsurface contamination by compounds associated with gasoline such as methyl tertiary butyl ether, or MTBE, a fuel oxygenate. Benzene, toluene, ethylbenzene, and xylene (BTEX), which are also components of the gasoline stored at the site, were also detected in the groundwater and creating a potential threat to SBNWR.

An existing remediation plan was to use Oxygen Releasing Compounds (ORC) in approximately 180 injection points at Site 14 to clean up the MTBE and BTEX compounds. However, the use of ORC to enhance the microbial degradation of these existing hydrocarbons would have been hampered by the intrinsic high oxygen demand of the site soils, significantly increasing the remediation costs. Before implementing the ORC remediation approach, the Navy requested that Geosyntec complete an ecological risk screening (ERS), field investigation, microcosm study, geochemical evaluation, remedial site evaluation (RSE), and a corrective action plan (CAP) to deal with the contaminants of concern.

Geosyntec began by conducting the ERS, which determined that there was no significant threat to the SBNWR from the fuel-based contaminants, instead relying on monitored natural attenuation (MNA) rather than full scale active remediation to reach the regulatory goals for the site. This was documented in a Technical Memorandum with which the regulators concurred, resulting in the Navy avoiding a far more costly remediation effort. Also, the RSE, CAP, and completion of a subsequent Focused Feasibility Study were removed from our Scope of Work due to active remediation no longer being needed, providing the Navy with additional cost savings.

Geosyntec was able to base our conclusion of no significant threat to the estuary habitat on regulatory guidance from the U.S. EPA and California EPA, as well as on information from the Florida Department of Environmental Protection. We were also able to base this conclusion on our own previous studies and other work on the use of monitored natural attenuation (MNA) for the remediation of MTBE. While MNA requires groundwater monitoring and other actions on our part, it is far less intensive than other methods and would eliminate the disruption of the SBNWR with drill rigs and other equipment. Geosyntec's past experience with MNA included authoring a guidance manual on its use as a viable remedial option for MTBE for the American Petroleum Institute. Geosyntec's optimization strategy looked at all options including the "no further remedial action" option, which allowed us to successfully recommend MNA as the most feasible method.

Geosyntec's ERS, along with our expertise with MNA and its use as a remedial option for MTBE, provided cost savings to the Navy of over $350,000. The Navy's lead remedial project manager for Site 14 said that, "...as a result of the risk assessment, the Navy and Geosyntec were able to convince the California Department of Toxic Substance Control and the Regional Water Quality Control Board that the risk level does not pose any ecological concerns to the Refuge. This resulted in a significant cost avoidance of having to conduct groundwater remediation at Site 14." By achieving concurrence from the regulators for MNA, the Navy avoided the need for extensive remedial action and the RSE, CAP, and FFS at this site.