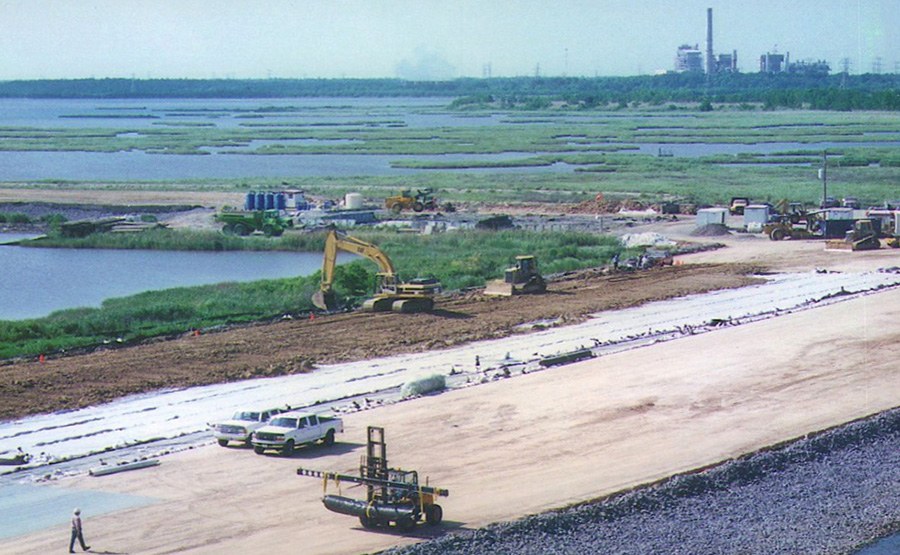 Originally part of a tidal marsh between a lake and river near the Texas/Louisiana border, the Bailey Superfund site is an "orphan site" resulting from past waste disposal operations. In the 1950s, two ponds were constructed as part of a fishing camp by dredging the marsh and using the sediments to form dikes. Additionally, a variety of wastes including industrial waste, refinery waste, tarry sludge, municipal waste, and debris were used as fill material for two of the dikes. Within three miles of the site, over 7,500 people use wells for drinking water, so metals, phthalates, solvents and other compounds in the surface water, groundwater and soils were of concern. The original remedy of site-wide, in-place consolidation and stabilization of sediments and wastes, developed by others, proved to be difficult to implement as well as more costly and time consuming than originally estimated. Upon further analysis, the remedy was determined to be technically infeasible and implementation was abandoned.

The PRP group retained Geosyntec to perform a Focused Feasibility Study (FFS) to identify alternative remedies. The project included the removal of tarry wastes from the marsh and development of an in-place closure for other wastes within the former disposal area. Contaminants of concern included petrochemical constituents and arsenic. We developed a remedy that included: in-place consolidation of the highly-compressible disposal pit sludge; capping the disposal pits with a lightweight composite barrier; removal and off-site disposal of "hot spot" areas (wastes in the marsh and on-site disposal pits); and collection and treatment of consolidation water during remedy implementation. The FFS included a risk-based technical equivalency demonstration, developed by Geosyntec, to illustrate that the performance of the revised remedy exceeded that of the original remedy.

Waste removal activities took place concurrently with the development of the revised design to avoid regulatory penalties and mitigate site management costs. Geosyntec developed the revised design, provided on-site resident engineering and construction quality assurance services throughout all phases of work, and assisted with regulatory negotiations, drafting of two Explanations of Significant Difference (ESDs) and a change to the Record of Decision (ROD). All components of the revised remedy have now been implemented.

Not only was Geosyntec able to develop an implementable remedy, the remedy saved the PRP Group an estimated $20 million compared to implementation costs of the original remedy. At the second five-year U.S. EPA review in 2005, the remedy was found to be "protective of human health and the environment. " Over 156,000 cubic yards of hazardous materials in two capped waste areas of 10 acres were addressed to prevent direct contact and off site migration. Sensitive wetlands have been protected and made safe for wildlife and recreational activities." The U.S. EPA is seeking concurrence from TCEQ to delist the site from the NPL.