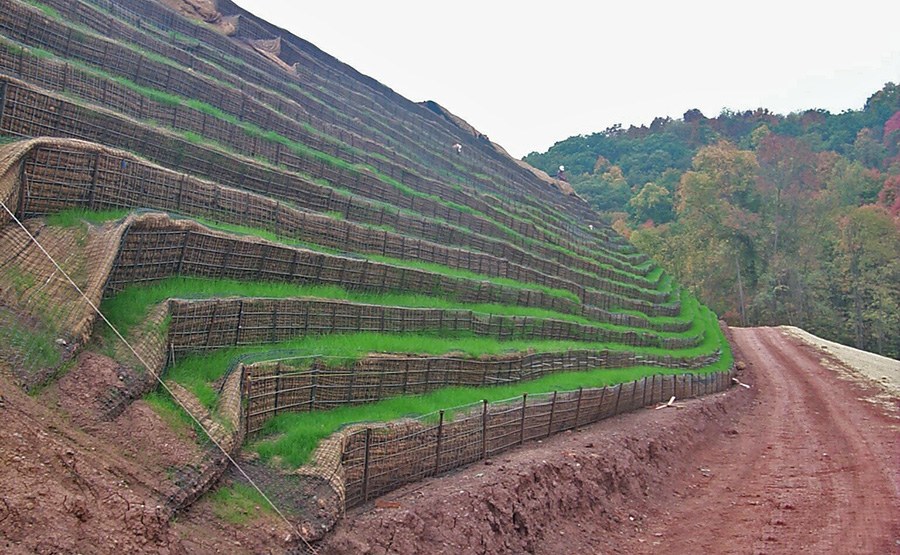 The Vandale Junkyard NPL site was operated as a permitted junkyard for over 40 years, and was included on the NPL in 1986. After extensive site investigation activities conducted by others, U.S. EPA Region 5 issued the Record of Decision (ROD) in 1994 calling for a non-time critical remedy involving capping. During the junkyard's active life, waste in one area of the site was ignited at the top of a 150-ft high slope, which resulted in a solid waste residue (SWR) consisting of glass, metal debris, and ash mixed with soil. The SWR was pushed down the slope over the natural colluvium present over bedrock. The planned remedy developed by others for the site included placement of stockpiled waste from other areas of the site over the SWR and a final cover system installed over the placed waste materials. At the onset of remedy implementation, it was discovered that the hillside was geologically unstable and the surficial SWR and colluvial soil were actively creeping downslope. The EPA required the site PRP group to quickly investigate the cause of the geologic instability and to develop a revised site design to stabilize the slope and achieve the environmental remedial action objectives. The PRPs retained Geosyntec to undertake this scope of work.

Geosyntec conducted an extensive geotechnical investigation that included soil borings, rock corings, and the installation and monitoring of slope inclinometers, piezometers, and settlement points. The displaced shape of the inclinometer revealed that slope movements were limited to the SWR and colluvial soil that overlies interbedded sandstone and mudstone bedrock, with the locus of slope movement found to be in the colluvium near the bedrock interface. Our investigation also included laboratory shear strength testing of the colluvium using a torsional ring shear device. This testing was performed to obtain residual shear strength parameters along the existing colluvium slip surfaces. Piezometer data indicated a rapid response to rain events as indicated by the build up of water head in the SWR and colluvium above bedrock. Review of field instrumentation data revealed that slope inclinometer movement rates were temporally correlated to periods of rainfall.

As construction progressed, additional impacted material was discovered in other areas of the site. When this occurred, Geosyntec conducted stability analyses to demonstrate that the MSE buttress height could be increased to accommodate this additional material. By increasing the buttress height, off-site disposal of material was avoided. The new design was approved by regulators without an amendment to the ROD and the project was constructed successfully. The Five-Year Review conducted by U.S. EPA "found that the remedy was constructed in accordance with the requirements of the ROD. The constructed waste cap portion of the remedy is functioning as designed. The immediate threats at the site have been addressed, and the remedy is expected to be protective when groundwater, sediment, and surface water cleanup goals are achieved through monitored natural attenuation."