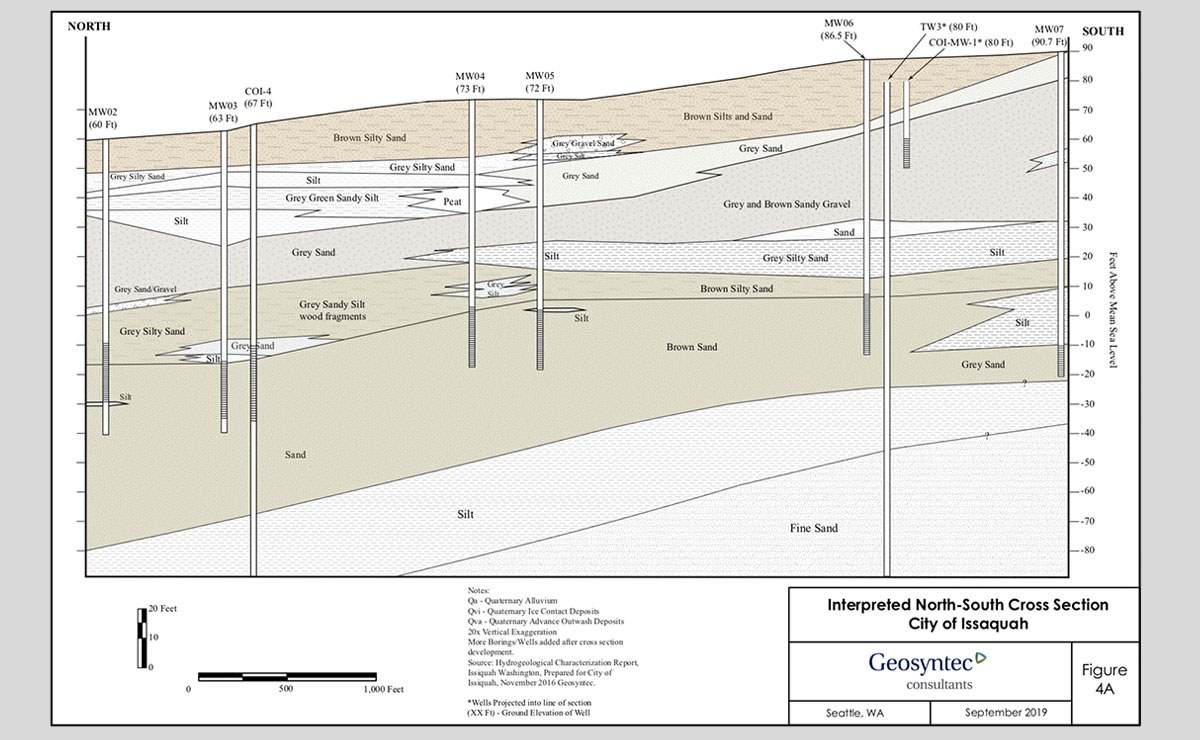 Perfluorooctanesulfonic acid (PFOS) was detected in a water supply production well owned by the City of Issaquah as part of sampling required under the federal Unregulated Contaminant Monitoring Rule (UCMR). PFOS is one of a group of thousands of similar man-made polyfluorinated compounds that are rapidly emerging as potential hazards to human health and the environment. PFOS was found at levels in excess of the U.S. EPA advisory level of 0.07 parts per billion (ppb), the source of which was not known among multiple possibilities. Geosyntec was retained to help the impacted city respond to the detection of PFOS in their system, identify and characterize the extent of PFOS contamination in their shallow and deep aquifers, help them evaluate long-term water supply and treatment options, and present technical information and respond to the City Council and the general public.

Geosyntec conducted an initial assessment of the hydraulic connectivity between the city's shallow 80-foot well, which had PFOS levels of 0.5 ppb, and their deeper 300-foot well, which had a lower detection of 0.02 ppb. We found that vertical and horizontal hydraulic gradients in the aquifer system vary seasonally and in response to pumping by both the City and an adjacent water district. We then conducted a review of potential sources and available monitoring wells, installing seven monitoring wells to characterize the hydrogeology in the vicinity of the wells. Geosyntec's scope of services also included aquifer testing, video well inspections, sampling of non-city-owned wells, and continuous water-level monitoring at city monitoring wells. A likely source for PFOS was identified at a nearby former fire training facility. Characterization work is ongoing to evaluate PFOS in the Lower Issaquah Valley Aquifer, including at other former fire training facilities. The Washington State Department of Health began rulemaking, followed by a Draft Cleanup Action Plan released by the Washington State Department of Ecology, although to date no formal regulatory action has been taken to regulate polyfluorinated compounds in soil or groundwater. Our scope has evolved to collaborate and participate with the Department of Ecology and other stakeholders, conduct groundwater modeling, and review site characterization work conducted by other stakeholders for the city.

The city was faced with a difficult situation when the EPA lowered the advisory level for PFOS during the site investigation. As the project to address the PFOS in the water supply well proceeds, Geosyntec has developed and maintained an open and transparent communication with city staff, the City Council, the Department of Ecology, and the public, building trust that water quality was being maintained below the  EPA advisory level. They also trust that our team is working to assist with source identification and develop both a short-term and a long-term strategy for managing the city's wellfield.