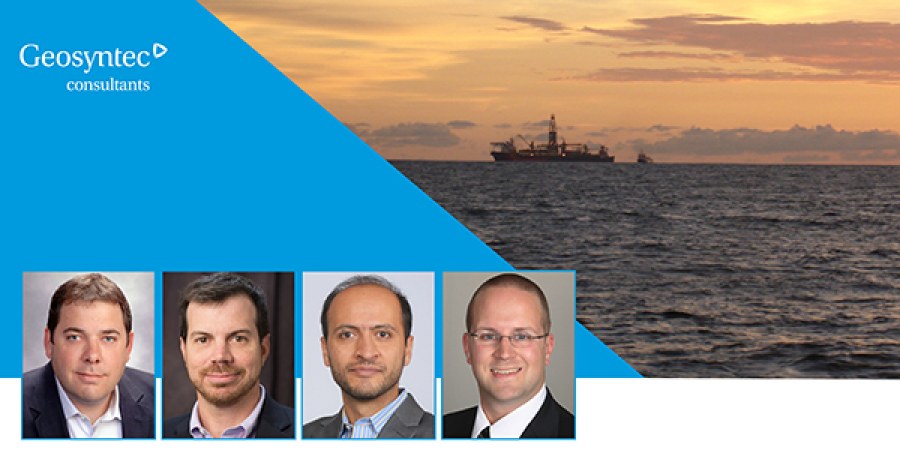 Logan, Ali, John, and Rodolfo as well as Juan Pestana and Ajay Shastri served as reviewers for other papers that were published by DFI for the symposium. In addition, Rodolfo is a member of the symposium's organizing committee.

John Barrett is a Senior Engineer based in Tennessee with more than 10 years of experience focused on geotechnical and geoenvironmental engineering. John has worked on a large array of projects and assisted in the construction oversight of drilling operations and the installation of post-tensioned ground and rock anchors. He has also gained exposure to staged construction on soft ground, dam foundation preparations and foundation grouting. John has managed projects such as the installation of stress relief slots at Fontana Dam and geotechnical field investigations.

Logan Brant is a Principal Engineer based in Texas with more than 14 years of professional experience focused on geotechnical engineering. Logan has worked on numerous offshore, nearshore, and onshore projects, for which he has provided on-site inspection and client technical representation services as well as office-based engineering and design services.

Ali Ebrahimi is a Principal Geotechnical Engineer based in Texas with more than 16 years of experience focused on civil and geotechnical engineering. Ali has experience in site characterization, real-time geotechnical instrumentation and monitoring, soft soil design and evaluation, and project management and budget/schedule control.

The fourth ISFOG event will be managed by the Geo-Institute of the American Society of Civil Engineers and the Deep Foundations Institute, held under the auspices of the ISSMGE Technical Committee 209 on Offshore Geotechnics, and will host the fifth McClelland Lecture. It will strive to continue providing a specialist forum for practitioners and academics to share solutions and new ideas that address the dynamic challenges of working in offshore design and installation. ISFOG 2021 will highlight emerging technologies related to data science and also emphasize the recent surge in offshore renewables development, both domestically in the U.S. and globally. Other growing areas of interest include performance-based design and addressing the challenges of an ageing offshore infrastructure, whether it be extending the operating life of these structures or solving the challenges and opportunities related to their decommissioning.

DFI is an international association of contractors, engineers, manufacturers, suppliers, academics and owners in the deep foundations industry. Its multidisciplinary membership creates a consensus voice and a common vision for continual improvement in the planning, design and construction of deep foundations and excavations. DFI brings together members through networking, education, communication and collaboration. With its members, DFI promotes the advancement of the deep foundations industry through technical committees, educational programs and conferences, publication of guides and specifications, a peer-reviewed journal, a flagship magazine, research, government relations and outreach. DFI has more than 3,500 members worldwide.

Review of the Design of Driven Piles Penetrating Weak Rock for Offshore Applications
Authors: John Barrett and Luke J. Prendergast
A growing number of civil engineering projects are utilizing steel piles driven into rock where a significant portion of the pile capacity is derived from the shaft resistance. Despite the growing number of projects utilizing the technology, little to no guidance is offered in the literature as to how the shaft resistance is to be calculated for such piles. A database has been compiled for driven piles that penetrate rock. The database consists of 42 pile load tests of which a majority are steel H-piles. The objective of this paper is to present the state of practice for estimating the shaft resistance of driven piles that penetrate rock in the context of the developed database. Pile capacities calculated using the state of practice are then compared to load test data from two well-documented case studies.

Design of Shallow Foundations for Tidal-Stream Energy Structures
Authors: John Barrett, Kenneth Gavin, and Tom Doyle
Tidal-stream (tidal) energy is a renewable form of energy produced by harnessing the kinetic energy of marine currents created by the rise and fall of the tides and converting it into electricity. To-date, tidal energy development remains largely in the demonstration stage and the development community has not rallied behind any one foundation technology. The distinguishing challenge for tidal development is the required installation technique and the uncertainty surrounding their performance in environments where the seabed has been stripped of most of its sediment and the underlying bedrock is left exposed due to the high energy currents common to locations suitable for turbine deployment. Shallow foundations, or gravity-based structures (GBS), are one of the leading foundation solutions for tidal turbines because they can be easily installed in these demanding environments; however, like offshore wind turbines, tidal turbines are subjected to predominantly horizontal loads. This paper describes the results from a combined horizontal and vertical load test conducted on a novel footing geometry designed to maximize penetration into the seabed. An onshore test site was selected based upon geologic similarity to possible offshore developments. The results of this study outline the importance of achieving footing penetration during turbine installation.

An Assessment of the Overconsolidation and Post-Sedimentation Structure of Marine Clay from Offshore Northern Mozambique
Authors: Logan Brant and Rodolfo Sancio
The marine clay found offshore northern Mozambique was investigated for the development of a proposed natural gas field. The marine clay was found to exhibit an unusually large undrained shear strength at shallow depths, in some instances exceeded 100 kPa at the seafloor, a response initially thought to be caused by either overconsolidation or cementation. The post-sedimentation structure of the marine clay was assessed to determine if cementation was present and the most likely mechanisms contributing to the overconsolidation. A series of one-dimensional consolidation tests were conducted on intact and remolded specimens. All intact specimens tested from the study area were found to be overconsolidated, typically with moderately high yield stress ratios (YSRs) (2 < YSR < 5) at depths between 10 and 40 meters (m) below the seafloor; even higher ratios were encountered in the upper 10 m. Collectively, the high YSR and pre-overburden pressure (POP) measured within the deeper canyons, the absence of an "S" shaped virgin consolidation curve, POP values generally consistent within each exploration, and compression curves for intact specimens generally between the intrinsic compression line and sedimentation compression lines, provide evidence suggesting that the overconsolidation of the northern Mozambique offshore marine clay is principally the result of natural sedimentation due to mechanical consolidation with erosion and aging and not the result of post-sedimentation structure, such as cementation or leaching.

CPT Correlations for Estimating Undrained Shear Strength of Marine Clay Offshore East Africa
Authors: Ali Ebrahimi and Rodolfo Sancio
Accurate estimates of undrained shear strength are important to develop geotechnical parameters used as input in slope stability analyses and to evaluate the foundation capacity and methods of offshore infrastructure installation. In situ piezocone penetration test (CPT) measurements are commonly used in geotechnical practice to estimate undrained shear strength but they require empirically-derived cone factors (i.e., N values) that are representative of the clay materials, stress history, and geological conditions. The lack of empirically derived cone factors for a project site offshore of east Africa required that cone factors be independently developed. CPT correlations were developed for estimating undrained shear strength as measured in direct simple shear (DSS) tests for the marine clay found offshore east Africa in water depths greater than 800 meters. Four different cone factors were developed: Method 1, which is based on the net cone tip resistance, Method 2 which is based on the effective cone tip resistance, Method 3 which is based on excess cone pore water pressure, and Method 4 which is based on corrected CPT tip resistance. Statistical analyses indicated that despite the significant care in sampling and testing, the coefficient of variation of the cone factors ranges between 21% and 31%. Depth dependency of N values is a limitation for the use of Methods 2, 3, and 4. Methods 1 and 2 appear to be equivalent with respect to estimating DSS undrained shear strength, particularly at depths < 20 m.

Cyclic Response of an East African Marine Clay
Authors: Rodolfo Sancio and Logan Brant
A marine clay found within the development area of a gas field offshore east Africa was tested in the laboratory to measure its geotechnical properties. That work found the marine clay to exhibit abnormally high shear strength at shallow depth below the seafloor primarily due to overconsolidation from erosion and aging. This marine clay also exhibits relatively high values of carbonate content, but its mechanical response is not controlled by it. Given that the gas field is located within an area of moderate seismicity, a cyclic testing program was implemented. Laboratory tests were conducted to measure shear strength degradation and cyclic softening. Consistent with findings in geotechnical literature, results indicate that 1) higher applied cyclic stress ratio (CSR) causes specimens to reach similar strain levels after fewer cycles, 2) the CSR vs. N curve is relatively flat, 3) increasing overconsolidation ratio causes an increase in the cyclic strength of the soil (more cycles required to reach similar strain), and 4) specimens tested at a higher frequency exhibit higher cyclic strength than specimens tested at a lower frequency. Most cyclic tests were followed by either a monotonic direct simple shear test to measure post-cyclic undrained strength, sustained shear stress to measure creep, or reconsolidation to the initial vertical effective stress. The results of these tests are also described herein.

Below are on-demand webinars. Looking for upcoming webinars? Visit…

Andrew Higgins, John Barrett, and Jamey Rosen Coauthored an Article on Information Management Systems for Dam Construction in the Journal of Dam Safety

Geosyntec Assisted with Investigation and Evaluation of Offshore Soils

Geosyntec assisted with investigation and evaluation of offshore soils at selected…

Ali Ebrahimi and Rodolfo Sancio to Exhibit at IDT EXPO