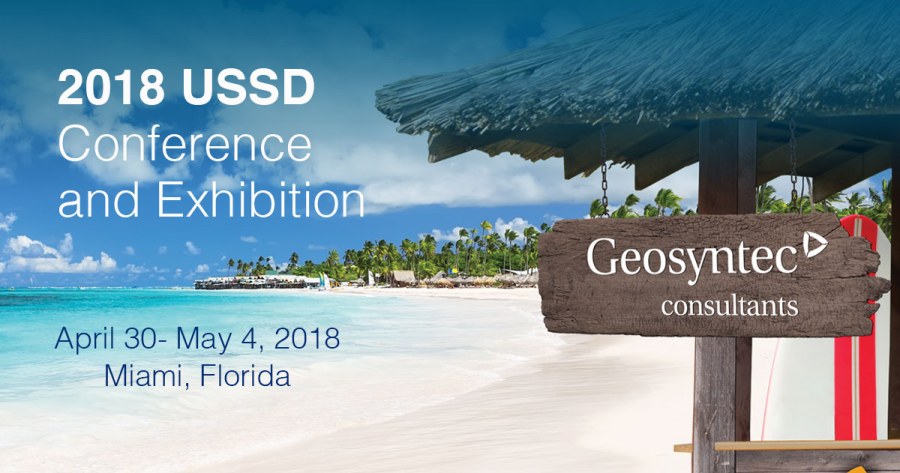 Leading Geosyntec dam practitioners will present at the 2018 United States Society on Dams (USSD) Conference at the Hyatt Regency in Miami, Florida on April 30 – May 4, 2018.

This is USSD's 38th Annual Conference & Exhibition and the first time it will be held in Florida. The Theme, "A Balancing Act: Dams, Levees and Ecosystems," reflects the importance of environmentally sustainable water projects within diverse and sometimes fragile ecosystems.

The USSD is dedicated to advancing the role of dam and levee systems and building the community of practice. As the United States member of the International Commission on Large Dams (ICOLD), USSD provides a forum for the exchange of knowledge and experiences and is charged with leading the profession of dam and levee engineering.

Title: When a CCR Impoundment is Not a Tailings Dam
Presenter(s): Robert Bachus, Geosyntec Consultants; and Robert Snow, D'Appolonia Engineering
Session Track: 1D: Tailings Dams and CCR
Location: Miami Lecture Hall
Abstract:
The 2014 tailings dam failure at the Mt. Polley mine in Canada bears striking resemblance to the 2008 coal combustion residual (CCR) dredge cell failure at the Kingston Fossil plant in Tennessee. Both facilities were constructed and operated as tailings dams. While many CCR ponds contain tailings-like materials (i.e., sluiced fly ash and bottom ash), the construction of many CCR impoundments more resemble homogeneous earthfill dams, not tailing dams. However, as many of the old CCR ponds are being closed in-place and the containment dikes partially removed, the properties of the impounded materials (i.e., the "tailings") must be considered by designers and regulators. This paper and presentation will highlight the various techniques used to construct CCR impoundments and draw similarities and differences to their mining counterparts…tailings dams. The authors will also introduce the engineering properties of CCR materials and the important role of the water retained in the impoundment when considering long-term final closure options.

Title: Seismic Remediations at Lost Creek Dam
Presenter(s): Ronald Oaks, Bureau of Reclamation; Lelio Mejia Geosyntec Consultants; and Elizabeth Ouellette, Bureau of Reclamation
Session Track: 3A: Earthquakes – Embankments I
Location: Monroe
Abstract:
Lost Creek Dam is a Bureau of Reclamation facility located approximately 30 miles east of Ogden, Utah. The dam was remediated for potential liquefaction in both the upstream and downstream foundations using deep
dynamic compaction. This was done using a 30 ton weight dropped in a grid pattern from varying heights up to 100-feet of free fall. An area of approximately 56,000 ft2 upstream and approximately 60,000 ft2 downstream was treated. The full treatment depth was estimated to be up to 46 feet, and treatment was expected to result in densification of the foundation all the way to bedrock. Excavation was performed at the upstream and downstream toes of the embankment: to ensure dynamic compaction to at least below the identified liquefiable layer; to provide a level platform from which the dynamic compaction could be performed; and to remove finer material near the surface which would not likely see any benefit from the dynamic compaction. There was also concern that this layer of fine material might create a "raft" that would absorb the energy from the dynamic compaction and not allow for the energy to penetrate to the full depth of expected treatment. Excavation to approximate elevation 5820 downstream and to elevation 5830 upstream also allowed for the removal of this "raft" and potentially liquefiable materials in the upper portions of the treatment areas. The area upstream of the dam required diversion of inflows through the outlet works, the construction of a sheet pile cutoff wall, and the installation of a dewatering system to remove foundation water prior to performing the dynamic compaction. Pre- and post-Becker Penetration Tests were performed to determine the degree, extent and improvement to potentially liquefiable soils. The project was completed with the addition of upstream and downstream stability berms over the remediated soils.

Title: Improvements to Modeling of Internal Erosion in Earthen Embankment Dams
Presenter(s): Al Preston, Dylan Walker, Jai Panthail, Chunling Li, Lucas de Melo, and Glenn Rix, Geosyntec Consultants
Session Track: 3B: Embankment Dams II
Location: Tuttle
Abstract:
One of the leading causes of dam and levee failure is the internal erosion of embankments or their foundations. The most current tool for analyzing this failure mode is WinDAM C, developed by U.S. Department of Agriculture and Kansas State University. WinDAM C has been used successfully to analyze internal erosion in many dams, but there are opportunities to improve the accuracy of the model by re-evaluating some of the modeling simplifications and assumptions.

We present results of ongoing research that evaluates the effects of two key assumptions; (1) that the soil
properties (e.g., erodibility and critical shear stress) are perfectly homogenous (i.e., represented by single values in the model), and (2) that the failure conduit is straight and horizontal. We re-cast the equations for flow and erosion in the context of a dam that has randomly varying soil properties based upon estimated distributions for key soil parameters, and as represented in the dam with two-dimensional (and ultimately three-dimensional) grid discretization. The equations allow for potentially curved and inclined conduits, as determined by random-walks. Discretized segments along the conduit erode at different rates and thus conduit segments can have different widths and heights, which in turn influences the flow.

The implementation of these equations, coupled with the implementation of random components, requires a Monte-Carlo approach where thousands of simulations are conducted, and results in a probabilistic model output (i.e., distributions of key output parameters such as failure time and peak downstream flowrate). Results of this approach and model improvements are compared to traditional WinDAM C results, where the range of outputs may be estimated by simple variation of the homogenous soil parameters.

We have developed a screening tool to assist the dam owners and policy makers in making risk informed
decisions and engaging in effective risk communication. The tool provides for quantifying the probability of dam failure, due to seismic loading, in a way that allows the relative seismic risk among the dams to be assessed. The results of the seismic risk screening will facilitate establishing priorities for further analysis or mitigation.

The screening tool consists of modules to address critical components of a risk-based dam safety evaluation under seismic loading. These components include: (1) seismic hazard, (2) fragility, and (3) seismic performance. The tool combines a site-specific probabilistic seismic hazard assessment with a probabilistic pseudostatic stability analysis incorporating uncertainty in the geotechnical properties for a given dam configuration. The seismic performance is represented by the crest settlement and the probability of failure is calculated. A crest settlement likely to result in rapid and uncontrolled release of the reservoir impoundment is established as the failure criterion. Furthermore, a sensitivity analysis was performed to provide more insight to the variability of the results based on the input parameters.

This paper describes the application of the developed screening tool to evaluate the relative seismic risk of embankment dams. This tool may help develop repair and rehabilitation priorities that enable limited resources to be used wisely as part of a long-term risk reduction program.

Title: Assessment of 2015 South Carolina Dam Failures Related to Offshore Hurricane Joaquin by the GEER Team
Presenter(s): Hermann Fritz
Session Track: 6B: H&H – Big Floods and Spillways
Location: Tuttle
Abstract:
Offshore Hurricane Joaquin (Cat. 4) resulted in record-shattering rains and flooding across South Carolina. Several areas of South Carolina saw precipitation accumulations exceeding the threshold for a 1-in-1,000-year event from October 1 to 5, 2015. The subsequent floods caused inundations throughout the state with areas around Charleston and Columbia hardest-hit and killed 19 people. The damage in South Carolina alone is estimated at $12 billion. This extreme event highlights the potential long range impacts of offshore hurricanes tracking hundreds of kilometers from a coastal landfall. A team from the Geotechnical Extreme Events Reconnaissance (GEER) Association, supported by the National Science Foundation, mobilized to investigate the impacts of the flooding in South Carolina. We present the field observations of the GEER team made during the field reconnaissance from October 11 to 14, 2015 in South Carolina's Richland and Lexington Counties, which includes Columbia. In total 52 dams are known to have failed in the historic flooding event. The GEER team visited a dozen dams including 9 breached dams and 2 overtopped dams without a breach. Several lessons were learned, which may improve reconstruction efforts and future dam operations. The two dam failures along heritage dams including the Columbia Canal highlight the importance of compatible materials avoiding sharp earth fill to rock wall transitions. Coordinated watershed management along with early reservoir level adjustments may provide some extra buffer during anticipated extreme rainfall events and allow to spread out the flood discharge. Ultimately, emergency spillway activations are inevitable during extreme flood events. Given the apparent dam overflow situations, most spillway capacities were insufficient for this extreme event. Increased spillway capacities depending on a dam's hazard classification along with erosion mitigation measures may strengthen the resiliency of dams during extreme flood events. Further information is available in a report posted on the GEER website.

Title: DIGGS Does Dams
Presenter(s): Robert Bachus, Geosyntec Consultants; and Allen Cadden, Schnabel Engineering
Session Track: 6E: Monitoring
Location: Brickell
Abstract:
Data Interchange for Geotechnical and Geoenvironmental Specialists (DIGGS) is a data transfer standard that is gaining acceptance in the geotechnical and geoenvironmental communities. Originally developed using funding from the Federal Highway Administration (FHWA) to efficiently capture data related to geotechnical boring logs, cone penetration test (CPT) soundings, and lab testing results, the data transfer protocol is gaining traction and having beneficial impact in other areas where disparate parties (i.e., consultants, contractors, vendors, etc.) routinely publish/submit data to owners as part of a project deliverables. The historic problem is that many of these submissions use paper copies (i.e., .pdf images) to transmit valuable data for the project… data that could be used by the owners to assess project performance and safety. Traditionally, when data are submitted to the owners, it often uses an author-specific (and often proprietary) software application and must then be reentered into other software applications (e.g., analysis software, database, etc.). An initiative undertaken by the Geo-Institute (G-I) of the American Society of Civil Engineers (ASCE) is focused on exploiting the full potential of DIGGS to geoprofessionals outside of the transportation community. Most notable of these efforts is the dams community, including the U.S. Army Corps of Engineers (USACE), where DIIGS can be used efficiently to capture the conventional geotechnical data referenced above, but also instrumentation records, construction records, dam-safety inspection records. Using DIGGS, users need not modify how they capture data, but rather will use DIGGS as a vehicle to transfer data to other applications where it can be shared, stored, and used. This paper will describe DIGGS and demonstrate how DIGGS can be used to capture instrumentation results and inspection logs.

Learn more about the event: 2018 USSD Conference and Exhibition.
Learn more about Geosyntec's Dams Services: Services for Dams.
For consultation regarding dams, levees and ecosystems, contact Lucas de Melo at This email address is being protected from spambots. You need JavaScript enabled to view it..
Learn more about Lucas at: https://www.geosyntec.com/people/lucas-de-melo