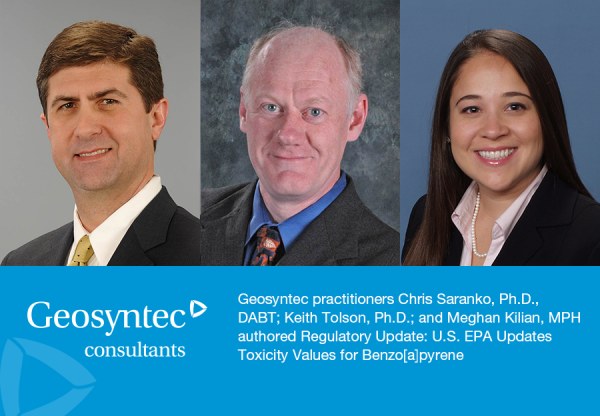 BaP is a member of the polycyclic aromatic hydrocarbon (PAH) family of chemicals, which are naturally present in crude oil and other petroleum products and are also generated during the combustion of many common materials (e.g., wood, oil, and coal). As such, they are virtually ubiquitous in the environment and frequently drive site investigation and cleanup.

The new IRIS toxicity values are shown in the table below, along with the previous IRIS values:

BaP is now considered less toxic by the oral route. New toxicity factors are also included that address carcinogenicity via inhalation as well as the potential for non-cancer health effects. However, the more conservative cancer toxicity values are likely to dominate site management.

The table below provides a comparison of the current EPA regional screening levels (RSLs) for soil under default residential and industrial exposure scenarios with the projected RSL values based on the 2017 IRIS toxicity values. 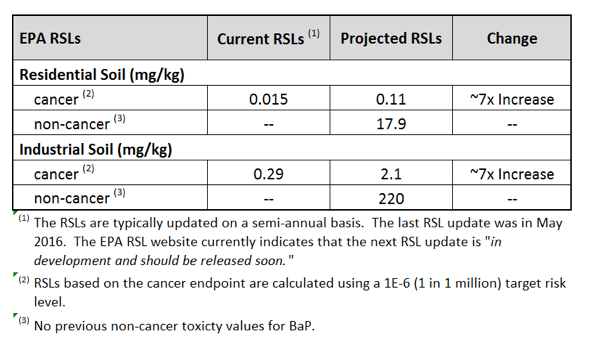 In spite of the increase in the soil RSLs, it's notable that residential soil RSLs, in particular, are still similar to or below average background concentrations in many urban areas across the United States. 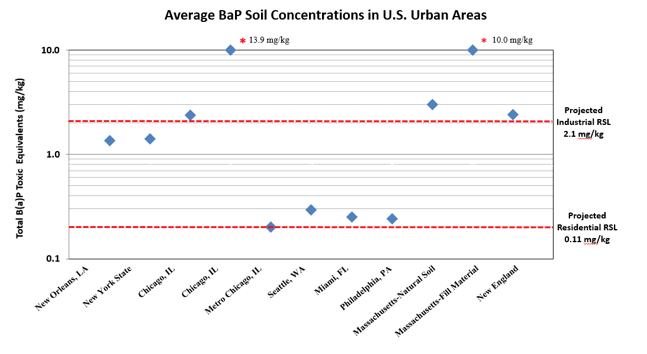 One of the most significant aspects of the final BaP assessment is the absence of a controversial dermal cancer slope factor (DSF) that had been present in earlier drafts of the assessment. When EPA released the first public comment draft of the BaP assessment in 2013, the novel DSF quickly garnered significant interest and controversy. It was the first time a skin-specific toxicity value had been developed by IRIS, and the stringency of proposed value would have resulted in risk-based screening levels that were well below background concentrations commonly encountered in the environment. Due to the substantial amount of public comments and the novelty of the DSF, EPA agreed to solicit an external peer-review conducted by members of its Science Advisory Board, supplemented with scientists with expertise in topics relevant to the BaP assessment.

On behalf of a trade organization, Geosyntec toxicologists Chris Saranko and Keith Tolson submitted written technical comments critical of the proposed DSF for consideration by the BaP review committee. Dr. Saranko also delivered oral comments before the committee. A number of these comments were echoed in the committee's final report, released in 2016, which concluded that the proposed DSF was not "sufficiently supported scientifically."  The final BaP IRIS assessment states, "A quantitative estimate of skin cancer risk from dermal exposure is not included in this assessment, as methodology for interspecies extrapolation of dermal toxicokinetics and carcinogenicity are still under development."  At present, EPA has provided no information about the anticipated duration of this process.

Considerations for Other Carcinogenic PAHs

The anticipated increase in BaP risk-based screening and cleanup levels may be offset by other EPA actions. BaP is just one of many PAH chemicals that typically exist as complex mixtures in the environment. Currently six other PAHs (benzo[a]anthracene, benzo[b]fluoranthene, benzo[k]fluoranthene, chrysene, dibenz[a,h]anthracene, and indeno[1,2,3-c,d]pyrene) are considered by EPA to have the same carcinogenic mode of action. EPA assigns a relative potency factor (RPF) between 0.001 and 1 to each of these PAHs to describe their cancer potency relative to BaP.

In a report released in 2010 entitled "Development of a Relative Potency Factor Approach for Polycyclic Aromatic Hydrocarbon Mixtures", EPA expands the number of individual PAHs with RPFs to 24, and six of these chemicals have RPFs larger than that of BaP, ranging from 5 to 60. This document was reviewed by EPAs Science Advisory Board in 2011, but a revised draft was never released. EPA previously indicated that it would defer implementation of the new RPF guidance until the BaP IRIS assessment was finalized; there have been no recent updates on the status of this guidance.

For more information about the updated toxicity values for benzo[a]pyrene, contact the authors of this regulatory update:

Below are on-demand webinars. Looking for upcoming webinars? Visit…

As in previous years, Geosyntec will be a Gold Sponsor of the 13th Annual Georgia…
Tweets by Geosyntec